Having flown early production Tempest Vs, the Air Fighting Development Unit recommended that the first RAF squadrons to be formed with the Tempest should be former Typhoons units. It was felt that since the two aircraft were similar in handling characteristics, re-equipping former Typhoon units would speed up the introduction of the Tempest. During January of 1944, No 486 Squadron received its first aircraft at Tangmere, later passing these aircraft to No 3 Squadron. As more Tempests were delivered, both units became fully equipped and were declared operational during late April of 1944.

Right: Tempest Mk. V,SA-N (JN766) of No. 486 Sqn RNZAF, at Castle Camps, Cambridgeshire, during the Squadron's re-equipment with the type.

The first operational sorties (ASR patrols) were flown by No 3 Squadron on 23 April. A short time later both squadrons moved to Newchurch, Kent, where they were joined by No 56 Squadron (flying Spitfire IX). Although deliveries of new Tempests were slow and No 56 Squadron was yet to re-equip, the three squadrons were designated as the first Tempest Wing and placed under the command of Wing Commander Roland Beamont. In the event, No 56 did not receive their Tempest before D-Day, but the squadron did fly missions over the beachheads with their Spitfire IXs.

During the D-Days landings, Tempests were kept in reserve as a precaution against Luftwaffe attacks against landings. When this threat failed to materialize, Wing Commander Beamont led nine No 3 Squadron Tempests over the beaches on 8 June. During the patrol the squadron engaged five Bf 109Gs near Rounen, shooting down three of the German fighters without loss. It was an auspicious combat debut for the new fighter and the first of an impressive total of air-to-air kills. Intially, however, kills racked up by Tempests were not to be against conventional aircraft, but rather the "malignant robots" - the V-1 flying bombs. 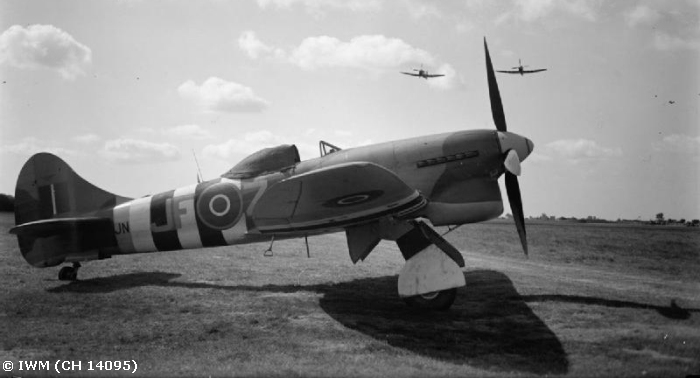 JF-Z (JN862) at Newchurch June 1944. JF-Z was F/Lt Remy van Lierde´s personal a/c. The cockpit canopy is covered to protect it from the summer sun. 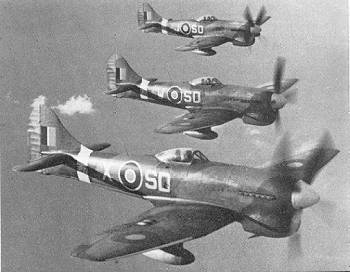 On 25 August 1944, No 56 Squadron conducted a fighter sweep across the channel to Cassel and Tempests were once more back in action over the continent. In addition to the Newchurch Wing, Nos 274 and 80 Squadrons were engaged in attacks against targets in France. All Tempest squadrons were retained on English airfields pending the ill-fated Arnhem operation in September 1944. Flying strafing attacks and flak suppression sorties against gun positions on islands in the Scheldt estuary, the Tempest 's contribution to the operation was successful. However, Operation Marketgarden failed in its objective, the early capture of bridges over the Rhine into Germany.

Two Hawker Tempest Mark Vs of No. 486 Squadron RNZAF take off from B60/Grimbergen, Belgium, on a patrol. 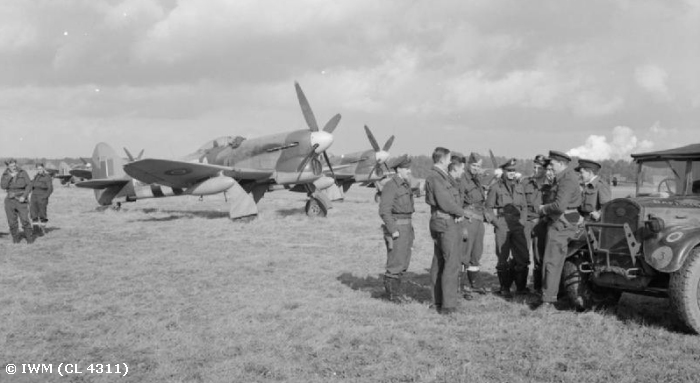 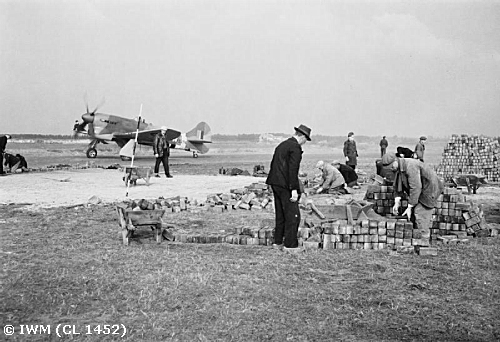 On 28 September the Tempests squadron were returned to the operational control of the 2nd TAF and took up residence on the continent. Nos 3 and 56 Squadrons were the first to deploy followed by Nos 80, 274 and 486. The renewed round of combat had cost fourteen aircraft, primarily to ground fire, although the squadrons did clash with Luftwaffe fighters on more than one occasion. Shortly after the five Tempest squadrons settled into Belgium, they were moved to Volkel, Holland under No 122 Wing. Nos 80 and 274 Squadrons were based at Grave temporarily, just long enough to come under attack by an Me262, before rejoining the rest of the Wing at Volkel.
Beamont was shot down and became POW on 12 October, with command of the Wing being passed to Wing Commander J.B. Wray. The Tempest Wing then embarked on a intensive period of air superiority missions, which was to last until the end of the war.

Left: Dutch labourers use bricks to create a dispersal point at Volkel (B-80), 24 October 1944. In the background a No 274 Squadron Tempest (EJ714/JJ-W) taxies out for another defensive air patrol over the battlefront. Volkel was home to No 122 Wing until April 1945, when the Tempest squadrons relocated to bases on German soil. 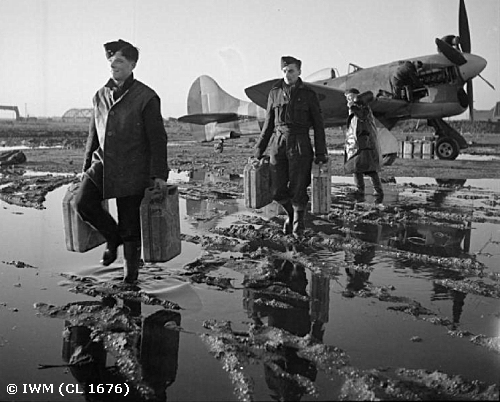 It was the German jets that offered Tempest pilots their greatest challenge. On 13 October Tempest of No 3 Squadron destroyed one, although usually only probables could be claimed. Finally on 3 December, a No 80 Squadron Tempest flown by F/O "Judy" Garland made short work of an Me262 of I/KG(J) 51.
The jet fighters were seen in small numbers, while Bf 109s and Fw 190s were occasionally encountered in some strength. Hectic activity took place on 17 December as Luftwaffe strove to give some air support to the Ardennes offensive. Tempest pilots of different squadrons clashed with both day fighters, nocturnal He219s, and Me262s.
The last few days of December 1944 brought pleny of action, although operations were occasionally hampered by American fighters, many of whom still had not got the message about Tempests. Fortunately, few of these encounters proved to be fatal, but they remained an unnecessary hazard for the British pilots.

Right: Flooded conditions at Volkel during the winter 1944/45.

As the Allied forces swept on towards the German borders during the winter of 1944-45, the Tempest established itself as one of the most successful ground attack in the European theatre. The main factors contributing to this were speed, controllability, weapons accuracy and superior all-round and attack vision.

Some indication of the number of targets of opportunity which abounded in that final run-up towards the end of the war can be gained by the fact that during February 1944, 122 Wing accounted for the record total of 484 German locomotives, 32 aircraft, 485 road vehicles, 118 barges and 650 railway trucks. 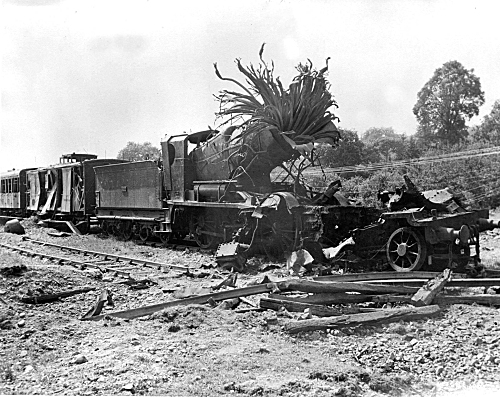 Last Year of the War

Fortunately the Tempest base at Vokel was not attacked during the 1 January Luftwaffe raids and airborne fighters of No 486 Squadron claimed five, with a further five shared between Nos 3, 56 and 80 Squadrons. Three Tempests were shoot down by American flak on 13 January, fortunately without casualties. The next day the victory tally included two kills for Flt Lt Fairbanks of No 3 Squadron, the first Tempest to score five confirmed kills.

On 23 January, 2nd TAF Tempests had their best day, claiming twenty-one kills (including one Me262), without loss. Good weather in February brought a series of interdiction missions and losses to flak. the territory held by German forces was being squeezed into a ever narrowing pocket bristling with guns. Tempest squadrons lost thirty-one aircraft during Ferbruary, with nine pilots being killed. More German jets were destroyed, including examples of the Arado Ar 234, but the major part of February 's effort was against German transport.

Also during the month, Nos 33 and 222 Squadrons arrived at Gilze Rijen as part of 135 Wing, while Nos 349 and 485 Squadrons returned to England. No 222 Squadron flew its sorties on 24 february, bouncing fiften Fw 190s and shooting down four.

Experienced pilots continued to be lost, not only to flak but to enemy fighters as well. FLT LT Fairbanks led six Tempests into a dogfight with fourty Fw 190s on 28 February. He was shot down and spent the rest of the war as a POW. 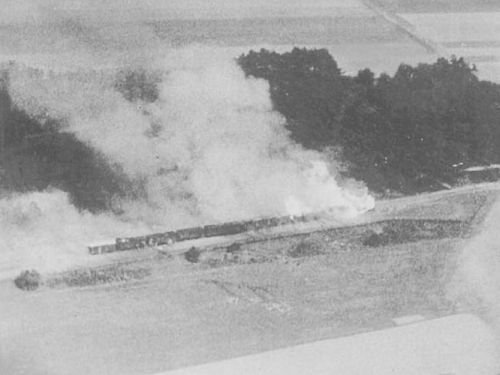 March brought a temporary ban on ground attacks due the high risk of losing pilots and aircraft at this late stage in the conflict. The ban did not remain in force for long and twenty-three Tempests were lost during March on armed reconnaissance, standing patrols, fighter sweeps, strafing attacks and escort missions.

During April Hopsten Airfield was occupied by No 122 Wing, which became the first tempest Wing to operate from German soil. Few thought that the war would last much longer and on 19 April No 80 Squadron returned to England. That same day, No 222 Squadron undertook a strafing attack on Husum Airfield. During this mission F/O Walkington chased and shoot down a small jet aircraft unlike any previously seen. Subsequent analysis of combat reports and gun camera film revealed that the aircraft was an He 162, one of the few to fly operationally.

The final aerial victory claim by a Tempest pilot occured on 3 May 1945 and the last combat loss was the aircraft flown by F.G. Auston, who was claimed (as a Typhoon) by LT Schmidt of JG 1 flying an He 162.

At the close of hostilities there were seven squadrons of Tempests in 2nd TAF and one in ADGB. Between them, the 2nd TAF squadrons had accounted for 240 enemy aircraft destroyed in air combat, plus thirteen probably destroyed.