TEMPEST DOWN One of our aircraft is missing...

During WW2, such announcements on BBC newcasts were an everyday occurrence, but post-hostilites it would become noteworth, particularly when the BBC six o'clock news stated "...one of our aircraft is missing and believed to have crashed in Russian zone of Germany, near Berlin..."

Angus Mackay had joined the RAF in January 1942 and received his Wings in November 1943. Assigned to fighters, Angus flew a succession of Hawker types including Hurricane, Typhoon and Tempest Mk. V. His squadron, No. 16, was still flying the latter immediately post-WW2 as part of the British Occupation Forces, changing up to the radial-engined Tempest Mk. II later in 1946, when the squadron was posted to the Berlin airfield of Gatow in the British sector of the occupied city, which was entirely surrounded by the Russian-held territory that became formally known as East Germany. 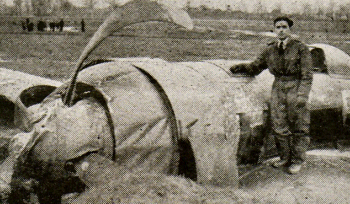 Whilst the pace of peacetime operations was inevitably less aircrew needed to maintain training and at 1pm on March 18th 1947, Warrant Officer Angus Mackay lifted

Whilst obliged to keep the Tempest within British Sector territory as much as possible, the GCA landing approach had to overfly the Russian Sector and Angus was well down the approach path at about 1,000 ft, approximately 5-6 miles out, when there was a loud bang, followed by loss of engine power and a stream of oil over the cockpit windscreen.

Looking around to "... select an appropriate field for a forced landing..." (always there on a training exercise, but not conveniently within sight in a true emergency!), W/O Mackay became aware for the first time in many landings at Gatow, just how much of the landing approach was covered in pine forest. Quickly trimming the Tempest for best glide angle, with 15 degrees flap, Angus was now down to 500 ft and realised he was unlikely to make it to the runway threshold, when a 'small' field came into view ahead and slightly to the left that he thought he could just about reach. 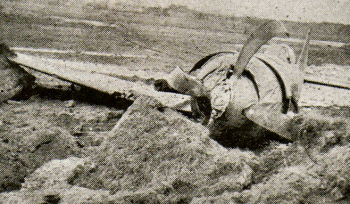 However, the Tempest's sink rate was such that the aircraft began scything through the treetops, before settling into the the field with a couple of violent bounces. Angus had notified Gatow air traffic control of his emergency on the way down and remained with the downed aircraft until.

Sometime later when an RAF van appeared out of the forest. Rescue was at hand... well not quite. The occupants recovered the gyro gun sight (still on the 'secret' list) from the aircraft and sped away. Angus was collected some time later!

W/O Angus Mackay went on to flying Gloster Meteor Mks. III and IV before leaving the RAF in December 1950. In August 1995, after the re-unification of Germany, he returned to Berlin with his son Stuart and revisted the scene of the drama.