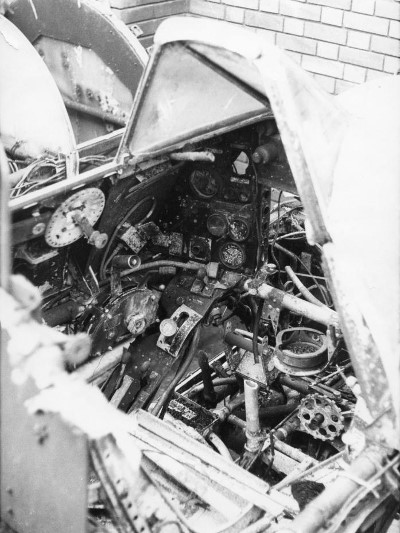 In circa 1980 Ted Sinclair, Norfolk UK, purchased two Tempest front fuselages from a car scrapyard in the Bristol area. The Tempests had still their front windscreens. The correct RAF serials were not known, but on one fuselage there was a number of 'Doodlebug' V1 kills painted. The photo (left) shows one of the cockpits as found.

On 13 March 2014 one of the cockpits was registered to Richard Grace as JN768. (The whereabouts of the other cockpit is unknown. See links below.) A well known Tempest and Typhoon researcher helped to identify the aircraft as JN768.

JN768 then passed a number of restorers but on 20 October 2017 she was registered to Anglia Aircraft Restorations. The company said to restore JN768 to flying condition.

"2019 is shaping up to be a very exciting year for the project and the next few weeks especially so. At the Autumn Members’ Day in 2018, we launched a new fundraiser and set an initial target of £50,000. We would like to thank all of the members who were able to contribute to this call.  With the proceeds of the fundraiser, we are delighted to be able to announce that the funds raised to date have allowed the project to purchase outright the remainder of the JN768 Tempest Project.

The Tempest Project had a complete set of jigs and fixtures for the main structure, which are compatible with RB396. To go with the jigs, there were significant sections of Tempest and a large number of ancillaries that can be used in the Typhoon. This purchase includes Hawker Tempest JN768, including the registration (G-TMPV) and full access to and use of the jigs when required by the rebuild of RB396, equating to a saving of approximately £200,000.  JN768 is a Mk.V Series I Napier Sabre engined Tempest.  She saw service during the Second World War on the south coast where she defended Britain from V-1 attack.  As you can see in the image below, JN768 is credited with 15 confirmed V-1 victories.

This is an extensive purchase and we are delighted to announce that the majority of the parts are being collected by the team in early March and will be on display at the Spring Members’ Day to all who attend.
Our Members will be among the very first to see the acquired parts in person. The jigs themselves will not be on display as they will be arriving at a later date. All current members will have received an email with the details for the Spring Members’ Day.  If you have not received the email, please contact the team using the contact form on the website. We will have much more happening on the Spring Members’ Day too, such as:

If you you are not already a member and would like to attend the Spring Members’ Day and see the latest acquisitions, then your first step is to join the Hawker Typhoon Preservation Group Supporters’ Club. If you are interested in joining, please click the ‘Join Now’ button below to view and purchase a membership that suits you, then you can register for the event.

We look forward to welcoming you to the Spring Members’ Day!"

"After a busy day, we are delighted to say that the collection of the majority of Tempest parts has arrived safely at HQ in Uckfield. We will have a full gallery up soon on the website, but until then we hope you enjoy these images. We would also like to say, it will be much tidier on the Members' Day in April. If you are not yet a member of the Supporters' Club and would like to come to the Members' Day, if you join now you can join us in April."

Please click the banner below to find out more about Tempest JN768 and Typhoon RB396!