He routed the Doodlebugs - A story about Squadron Leader Joseph Berry

The date: June 13th, just 15 years ago. White pencils of light criss-crossed as searchlights probed the early-morning sky over the bomb-torn East End. Ack-ack guns barked, the smell of burning hung in the air. At his post in London's Bethnal Green, Permanent Railway Inspector Manning of the L.N.E.R. thought it was just another of those night's. Then he heard a noise unique in his long experience of enemy air raids, it sounded for all the world like the beat of a two-stroke motorcycle engine in the sky.
He looked up, puzzled and saw approaching at low level what appeared to be a tiny monoplane with a brilliant illuminated tail. The guns in the nearby park opened up, tracer bullets shot upwards, but the little aircraft took no evasive action.

He watched the engine cut out, the nose of the plane tilted and it crashed with a shattering explosion square on the bridge at Grove Road Bethnal Green. Like children's sand castles the little houses to either side crumbled with the demolished bridge. In them six people died, and nine more were seriously injured. London had received it's first taste of Germany's new terror weapon the “Doodle-bug”, and blindly it had found it's way to a vital target, for the Grove Road bridge carried all main line traffic from Liverpool Street, Colchester, Ipswich, Norwich and Yarmouth as well as the suburban traffic to the Essex towns. On that night of June 12-13th exactly 15 years ago this week end, other pilot less aircraft fell at such scattered points as Cuckfield in Sussex, Swanscombe near Gravesend and Platt near Sevenoaks. Three days later heavy and prolonged bombardment by flying bombs began in earnest, in the first 24 hours, 144 crossed the coast and 73 reached the London area. During the following two weeks 100 flying bombs came over at a rate of about 100 a day, some 1,600 people were killed, 4,500 seriously injured and 5,000 slightly injured; and more than 200,000 houses were flattened or damaged. The rate of casualties during the first fortnight was as high as in the worst month of the Blitz. Something had to be done, as I stood by the Grove Road bridge in Bethnal Green looking at the new blocks of council flats and the recreation grounds which have risen on the site of the old doodle-bug devastation, I remembered Squadron Leader Joe Berry who did that something. Joe Berry now one of Britain's forgotten heroes.

Joe Berry- angular, slight, with a pale face and high cheekbones framed keen sunken eyes shot down 61 ½ flying bombs nearly all of them at night. He “killed” more than twice as many as any other pilot, he pioneered an experiment. Three times his “kill” nearly blew him out of the sky, once he deliberately blew up a crippled doodlebug surviving the explosion at 50 yards range only to have his claim contested. At one time he was the only remaining pilot of his unit; the rest had been eliminated, single-handed he wiped the eye of an entire day-fighter wing and revived the morale of his airmen. He died as spectacularly and selflessly as he had lived, a case might have been made for the award of the V.C. It was made twice for the D.S.O. he got a bar to his D.F.C. a year after the war when he was dead somebody gave him a second bar to his D.F.C. but few of Joe Berry's friends ever heard about it. Launching doodlebugs against Britain, half the size of a Spitfire, each carried a ton of high explosives at speeds varying from 250-400 M.P.H. independent of weather. By day the Tempests could just catch them, by night the Mosquito was too slow, so Berry and Squadron Leader Daniel both Mosquito experts were sent as the nucleus of a detachment to try their hand against the doodlebugs in the Tempest at night. Their base was Newchurch, a grass airstrip on top of Beachy Head, Berry's first two encounters had been vexing, but third time lucky, he and Daniel each flew three sorties that night.. After that nights sorties, comparing notes the next morning they decided they had mastered the art of interception, now they had to learn to adjust their range against the glare from the doodlebug's jet flame. Over the next fortnight Berry found that the jet flame changed in appearance as he decreased the range, overtaking an unusually slow bomb one night, he noted the early “Blow lamp” effect, then a red glow as the jet pipe shone through the flame close on his port side. Now he could make out the bomb's silhouette for the first time and not more than 100 yards away, either. He had hardly pressed the gun button when a blinding flash filled the windscreen, flung against the pressure of his straps, he sensed the thud of metal striking his fuselage, then he was through the debris and in clear air again. As he righted the aircraft, he detected a change in the beat of the motor, it faltered, picked up, and sputtered along uncertainly. Several high speed chases had left Berry uncertain of his exact position; he only knew he was some way out to sea, calling for a priority homing signal he turned the aircraft north, loosing height all the way, he just managed to scrape home without disaster. Three nights later Teddy Daniel hit the same sort of trouble, he was not so lucky. He sleeps somewhere beneath the Channel. At about this time the guns were re-deployed to the coast, so Berry and his companions had to fly either right out to sea or sandwiched between the gun belt and the London barrage balloons, which gave them only minutes from the time of sighting in which to destroy their targets.

On his first overland patrol Berry discovered he had to spend the first minute watching the searchlights follow the bomb, as the cone of flak screamed to it's apex at the doodlebug he waited to see if it would get through, if it did he pounced. He even destroyed one by getting in front of it and blowing it down in his slipstream. On August 1st he was awarded a bar to the D.F.C. he had earned in the Mediterranean, he greeted the award by standing beer all round and then destroying five more bombs. On August 10th came Berry's promotion to Squadron Leader. 501 Squadron, County of Gloucester, doing their hunting at night, and he was to command it. His new squadron could show only three “kills” for more than 200 sorties during the first 11 days of August, things would have to change. Promoted to detachment Commander, he shot down seven doodlebugs on the night of July 23rd as many as most pilots destroyed in the whole campaign, once again Joe Berry saw the blinding flash as a bomb blew up in his face at close range, a fragment hit his aircraft. Next day he tersely entered in his logbook R/T U/S.

At the end of the month Berry could look back on a Squadron “kill” rate increased by ten fold since he had taken over. Early in September the allied armies overran the doodlebug launching sites in the Pas-de-Calais area and they then had to seek fresh targets on German airfields in Holland. Before dawn on October 1st he and two other pilots took off in their Tempests and headed over the North Sea, at the Dutch coast they were 50 feet up and going flat out, a solitary gun opened fire from their flank, Berry's aircraft was hit, before the eyes of his companions it rolled over on it's back, over the radio came his familiar voice with it's last order before the aircraft dived into the ground……”Carry on Chaps, I've had it”. Yesterday as I stood in the shadow of the new bridge which now spans Grove Road Bethnal Green, I watched two proud and happy young mothers wheeling their babies to an airing in the park.

I WONDER IF THEY EVER HEARD OF JOE BERRY? 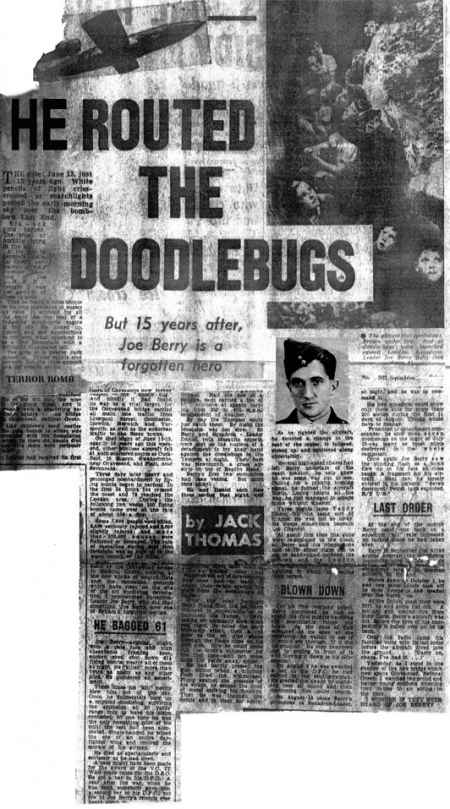