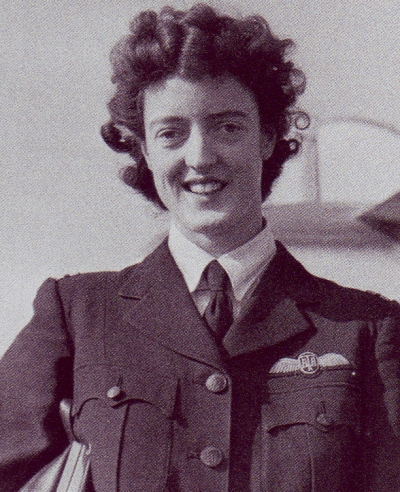 In 1953 Freydis Sharland, who has died aged 93, climbed into a 430mph Hawker Tempest V, and set off from an airfield in southern England on a 4,000-mile intercontinental flight. Her aeroplane was one of the biggest, and fastest, of the last generation of piston-engined RAF fighters, and her destination was Pakistan. Sharland's stopovers, an itinerary for the last days of empire, took in Nicosia, Baghdad – where she was entranced by the almond trees – and Bahrain, and then she undertook the final, and longest, leg to Karachi. Upon arrival, and having delivered the Tempest to the Pakistan Air Force, she was denied access to the officer's mess. She was, after all, a woman.

That epic was her longest flight, and her first outside Britain. But by then, Sharland was well established as a formidable flyer. She was one of more than 160 women who flew for the wartime Air Transport Auxiliary. Between 1939 and 1945, more than 1,300 ATA pilots delivered warplanes between factories, facilities and bases across Britain, and, later, into mainland Europe and the Mediterranean. In January 1940, the ATA's first eight female pilots were recruited, and, based at what had been the De Havilland airfield at Hatfield in Hertfordshire, began delivery of unglamorous, 100mph Gipsy Moth training aircraft.

Following the outbreak of war, Shar land became a Red Cross nurse in Colchester, Essex. She fulfilled her ambition to join the ATA in 1942, starting out on Magister trainers and graduating to twin-engined Ansons. Then she progressed to the frontline fighters, Hurricanes and Spitfires. She was at first based in Hamble, near the Supermarine Spitfire factory in Southampton. Her other stations included Sherburn-in-Elmet in Yorkshire, Prestwick in Scotland and White Waltham, the ATA's headquarters in Berkshire.

Sharland flew a range of British and American aircraft. There were twin-engined bombers such as the Vickers Wellington, the Lockheed Hudson and the ultra-fast, and tricky, De Havilland Mosquito – and there were the fighters. The Spitfire was her favourite. "It was so light, I fitted into it so well, it was such a nice little cockpit," she told an interviewer from the Second World War Experience Centre in 2008. "Fortunately," she observed, "I never had to shoot down a German. There wasn't one available at the time."

The rule was that ATA pilots avoided flying in bad weather. The reality was rather different, and 15 women died flying with the ATA. Navigation meant skilled, solo map reading – as it did on the way to Karachi – and tracking destinations by railway lines, lakes, gasometers, and so on. There were other dangers, too. Flying a Tiger Moth, Sharland was turned over by the slipstream of a giant, four-engined Liberator bomber.

She rarely complained about sexist behaviour, but she knew that, although men were on the look-out for their errors, women had no difficulty doing the job. She acknowledged that, thanks to the efforts of her fellow flyers, and those of Sir Stafford Cripps, minister of aircraft production, the ATA pioneered equal pay. She had never before, Sharland observed, had so much money in her life.

At a ceremony on 30 November 1945, a female flyer lowered the ATA's flag for the last time. But Sharland's flying career had hardly begun. She worked as a freelance commercial pilot, won her full RAF wings – which she never collected, saying she looked lanky in the uniform – and was active in the Women's Junior Air Corps and the Girls Venture Corps. In 1955 she founded the British Women Pilots' Association. The year before, competing against 16 men, she became British air racing champion.

Born in Cambridge, Freydis was one of three children of Catherine (nee Shuttleworth) and Charles Leaf, a meteorologist and archaeologist who, though shell-shocked in the first world war, would re-enlist in 1939. She was educated at Ancaster Gate school in Bexhill, East Sussex, and Wycombe Abbey school in Buckinghamshire. In 1937, when her father and her elder brother, Derek (who would be killed in action in 1944), began flying lessons at the Marshall flying school in Cambridge, Freydis called for, and won, the equal treatment that led to her life in the skies.

In 1955, she and her mother took the Edinburgh Castle liner to South Africa. On the voyage she met Tim Sharland. They married later that year, farmed in Africa and Britain, and raised a family, and, for a while, Freydis stopped flying. But not for long. She was piloting microlights up to the end of the 20th century.

Six years ago, with other veterans, she was awarded an ATA service medal by the prime minister, Gordon Brown, at No 10. Sharland, says Pauline Vahey, the BWPA's current chair, sparkled, mixing natural authority with warmth, charm and approachability. She wanted to encourage people and throughout her life she did just that, in word and deed.

She is survived by her husband, her younger brother, Robin, two daughters, Virginia and Angela, a son, Charles, and nine grandchildren.