A huge THANKS to Chris Thomas and Eduard for the permission to publish this article and images!

In 2006 I shared the information I had gathered on Pierre Clostermann’s Tempest with Christophe Cony, editor of Avions, who had been carrying out his own researches.  Our theories were published in Avions 151.  We thought then that Clostermann had three ‘JF-E’s (possibly four) but reassessment of all available RAF documentation including a complete analysis of No 3 Squadron’s Tempests in the last weeks of the war, photographic evidence and, crucially, a transcript of Clostermann’s own logbook, has now led to the conclusion there were only two. Please note that his logbook records aircraft code letters, whereas the Squadron ORB (Form 541) records the aircraft serial number. It is possible to link the two by comparing the dates/times/nature of each operation.  The latest evidence was published in a comprehensive article on Clostermann’s flying career in Avions 227.

Previously it was thought that the first JF-E was NV994 until damaged in a dusk action on 20 April 1945, when he claimed two Fw190s destroyed; a copy of his Combat Report survives in the UK’s National Archive. This sortie is not recorded in the ORB Form 541 (so we do not have the serial number) although it is mentioned in the accompanying Form 540 (a narrative which does not give detail) and it is in Clostermann’s own record; his aircraft – ‘E’ in his log - was damaged and he was wounded in the leg. He is absent from the operational record for the rest of April and returns to ‘ops’ again on 3 May, flying SN222 (according to the Form 541), recorded in his log as E. However, during the same period other squadron pilots were recorded as flying NV994 and when it was eventually returned to the UK for repair in July 1945, it was recorded as still marked as ‘JF-E’. So it is very likely that SN222 was not in fact JF-E.

Unfortunately, the code letter allocated to SN222 is not known but it is apparent that this aircraft was one of two replacements for Tempests lost on operations at the end of April 1945, namely JF-S and JF-G; the latter is more likely. So, why should Clostermann have recorded his flight as in ‘E’? Having studied many RAF log-books it is quite noticeable that as pilots became more senior they tended to be less scrupulous about their log-keeping. Particularly when a pilot had an allocated aircraft they often logged that machine as the one they were flying on most, if not all occasions; comparison with the squadron records shows this was not the case! 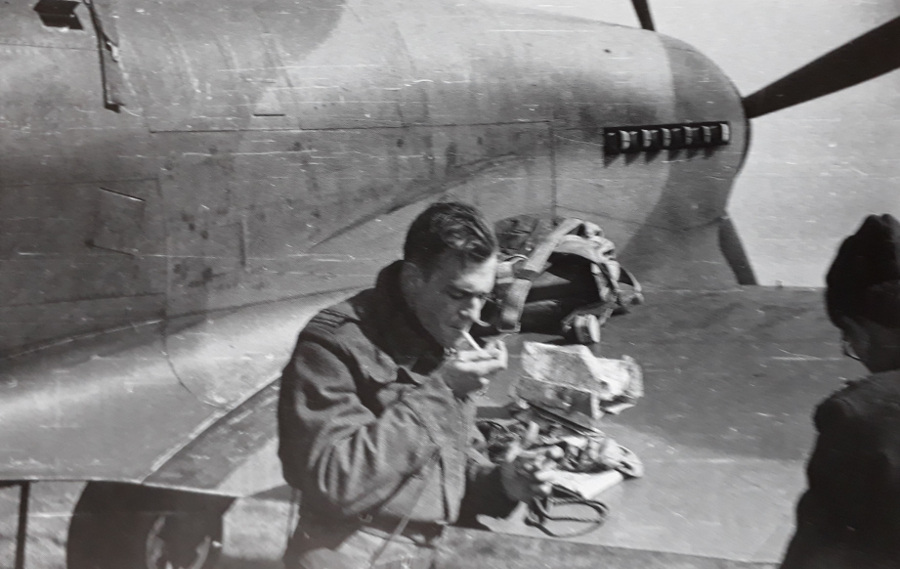 Photo right; After the flight (18 April) Flt Lt Clostermann lights a cigarette alongside NV994 JF-E. No name or scoreboard evident.

Another problem with records not supporting the event is that there is no record of damage to NV994, JF-E, on 20 April 1945, and the aircraft is recorded continuing on operations, flown by other pilots. So maybe Clostermann was not actually flying JF-E on this sortie either. His Combat Report for this date records that two Tempests were ‘Category B’ as a result of the action and it is apparent from his log that his aircraft was hit by fire from one of the Fw190s. A check through the records of all the Tempests in use by 3 Squadron on this date reveals that the two Tempests were NV978, JF-C, and NV923, JF-F, (both aircraft of Clostermann’s ‘A’ Flight) so it seems likely that he was flying one of these machines.

This means all available evidence now points to ‘JF-E’ having been NV994 from 15 April 1945 and all the way through to 1 July 1945, when it was damaged in an accident while landing in bad weather conditions at Vaerlöse, having been unable to land at Kastrup, 3 Squadron’s base in Denmark.

A replacement JF-E was now required and as the ORB only recorded the details of operational flights we are fortunate to have two photographs showing the new JF-E was NV724.  This was not a new Tempest; it had seen action with 486 Squadron as SA-V but suffered engine problems and is recorded with 151 Repair Unit for remedial action on 12 March 1945.  Back in serviceable condition it was transferred to 83 Group Support Unit in May 1945 and is recorded issued to 3 Squadron by 8 July 1945.

Identification of ‘JF-E’ as NV994 from mid-April through to 1 July 1945 prompted a re-assessment of the available photos; in particular the photo of ‘JF-E’ previously thought to be SN222. But first a couple of general points must be considered.

In response to an increasing number of ‘friendly fire’ incidents over the battlefields of NW Europe, the 2nd TAF decided to change the markings on all its combat aircraft. The order was issued on 2nd January 1945 and decreed that all wing roundels (both above and below to the wing) would be National Marking III (the type now known as ‘C1’) i.e. the same as the fuselage roundels already carried – with narrow white inner ring and a narrow yellow outer ring. At the same time all remaining ‘invasion’ stripes were to be removed, the rear fuselage ‘Sky’ bands were over-painted with camouflage and the ‘Sky’ spinners were painted ‘Night’ (black). Some units had already adopted coloured spinners and these too had to be painted ‘Night’. These markings had been applied to all 2nd TAF aircraft by 5 February 1945 and were strictly enforced until the end of hostilities.

Tempests received their camouflage paint at the Hawker factory before delivery to the RAF. The upper surface pattern was created using rubber mats cut to the shape of the prescribed camouflage pattern; the mats were not placed with absolute precision – the position could vary by a few inches in any direction – which means that it is often possible to identify specific aircraft by the small variations in their camouflage. This detail has helped to confirm that the photographs reproduced here all feature NV994.

It can be seen from the photos that JF-E/ NV994 wore this standard 2nd TAF scheme whilst on operations, the red spinner, scoreboard, and name ‘Le Grand Charles’ (to honour General Charles De Gaulle) were all added post war. There is no indication that the ‘Cross of Lorraine’ was carried on this aircraft. There are two photos, see below, which show Clostermann’s ‘scoreboard’ and you can see that the score has increased between the two photos. The reason for this is that Clostermann was able to ascertain, post war, that two of his claims, previously credited as ‘damaged’ were in fact destroyed and four more had been damaged. It has also been possible to account for the difference between the scoreboard and the RAF record of his claims is largely due to him including aircraft destroyed on the ground in his score (this was USAAF practice but not RAF). No photos have come to light that confirm NV994 carried the 3 Squadron badge on the fin, it is however, almost certain. It is known that the badge was applied to the squadron’s Tempests soon after hostilities ceased and is visible in several photos of their Tempests at that time.

On 1 July 1945 3 Squadron was part of 122 Wing at Kastrup, Denmark, and took part in a large display organised for the Danish people. Afterwards most of the Tempests landed at nearby Vaerlöse but Clostermann had an accident in NV994. The aircraft was declared ‘Category B’ which meant it had to be returned to Hawker for repair. It was later seen at the Hawker factory, while awaiting attention, still carrying it’s ‘JF-E’ codes.

Flt Lt Clostermann then received a new ‘JF-E’, collecting it from 83 GSU at RAF Dunsfold six days after his accident, namely NV724.  A recently discovered photograph, taken between 18 July and 8 August 1945, shows it with a scoreboard similar to the final one on NV994 but it did not carry name ‘Le Grand Charles’ nor the 3 Squadron badge.  However, a 3 Squadron badge was added, along with the famous Cross of Lorraine on the radiator fairing (possibly both sides?), before the well-known photograph taken on 27 August 1945 when Clostermann said farewell to his Tempest. The spinner appears to have been gloss black, as seen on other 122 Wing Tempests at this time.  NV724 continued in use with 3 Squadron after Clostermann’s departure but was badly damaged when its undercarriage collapsed on landing on 11 November 1945 and declared beyond economical repair. 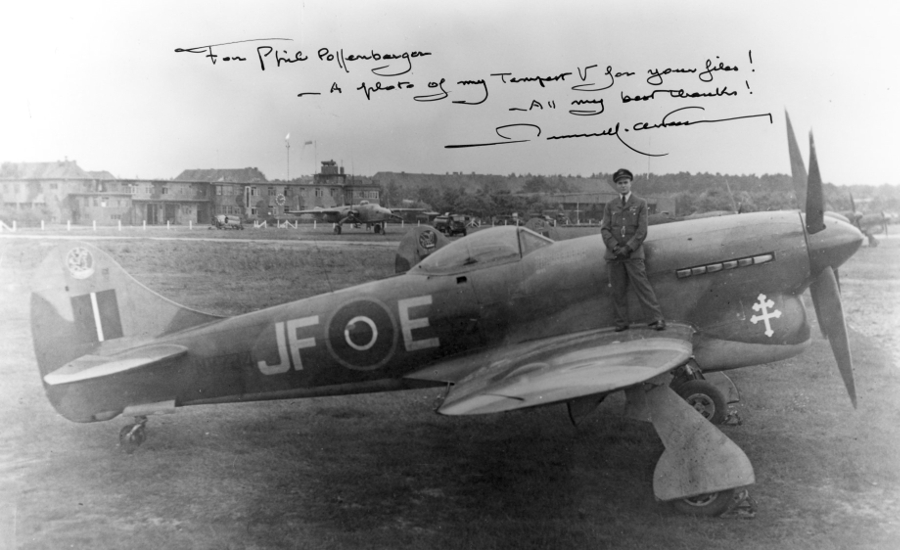