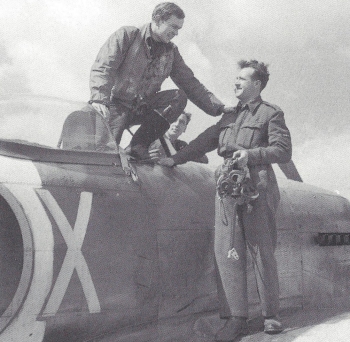 George Andrew "Lefty" Whitman was born on 5 March 1920, in Pennsylvania, USA and enlisted in the R.C.A.F. in 1941. In September 1942 he was posted to England with No 3 Squadron flying Hurricanes, Typhoons and Tempests.
He was shot down in September 1943 by flak and ditched in the sea. (First ever ditching of a Typhoon). While in his dinghy he was strafed and wounded by two Bf109s. His dinghy was sunk but he was rescued by a Walrus aircraft.

Two days after D-Day Tempests encountered Bf109s over the beaches and shot down three of them without loss. One of the Bf109s was shot down by Whitman. Whitman also shot down 14 flying bombs.

Later in the war he became a test pilot. His decorations include France/Germany Star and Air Defence Great Britain Medal.

He was honourably discharged in November, 1945, when he applied for and was granted Canadian citizenship. His work with the disadvantaged and underprivileged received national recognition, and in October, 1983, he was awarded the Order of Canada. In 1990, after retiring as Vice-President, Hudson's Bay Company Northern Stores, at the age of seventy, he remained active in the field of social development as a volunteer.

On May 2, 2007 at the Grace General Hospital, Winnipeg, Manitoba, "Lefty" Whitman passed away at the age of 87 years.

Whitman's story in "Listen to Us"