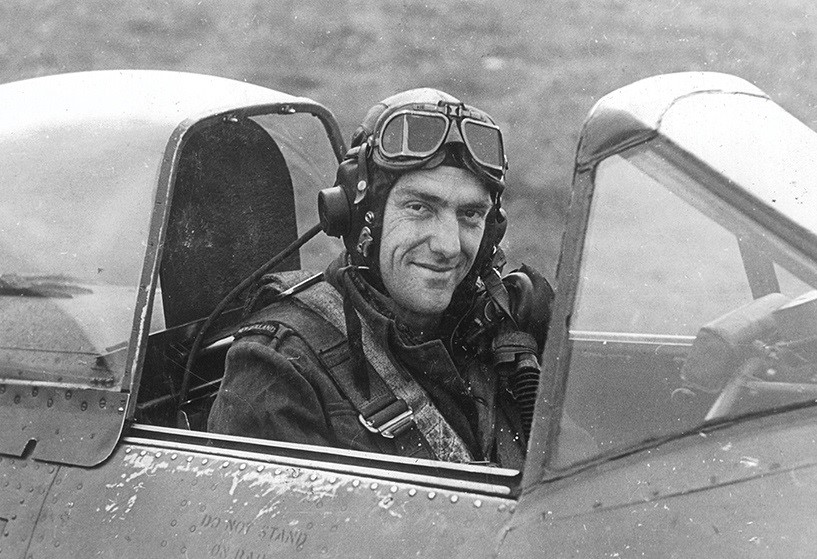 Glen ‘Rocky’ Maddaford was born on 22 November 1919, and was a teenager when his family moved to Hawera, Taranaki, in 1934. His father George owned the Monumental Masonry business, hence Glen’s nick name!

Young Glen worked as a driver, and later in the Railways. When war broke out he enlisted with the Air Force and was posted to New Plymouth in March 1942. His training took him to Woodbourne, where he converted to Harvard Trainers and twin-engined Oxfords.

In May 1943 Maddaford sailed for England. Flying training continued, including the solo flight in a Hurricane Mk. II. He was posted to the Middle East in May 1944, and converted on to Spitfire Mark Vs, then on to 241 Squadron and combat flying in Italy. Sorties included ground attacks, and dive bombing enemy munitions, artillery installations and tank squadrons, this time flying Spitfires M. IX.

In 1945 Maddaford returned to England, converted to Hawker Tempest Mk V. By April Glen was back in action with No. 486 Squadron in Europe. On 15 April Maddaford destroyed a Focke Wulf 190, and a ‘probable’ Messerschmitt 109.

"I was flying Orange 2 and with the remainder of the Squadron, was chasing nine FW.190s who were flying due west. As we closed the range the 190s broke port in line astern and selecting the last but one in the line, I tightened my turn to bring my sights on to him. The FW.190 viciously broke port and I was unable to bring him in line so I broke starboard and he came into my sights still in his turn, practically head-on. I opened fire from 500 yds closing the range to 100 yds allowing ½ a ring deflection finishing at zero.

I saw strikes along the engine – finishing at the cockpit. The FW.190 pulled violently up – stood on its tail – went over on its back and burst into flames. It went down in a slow spiral and I saw it crash in some woods and explode. Cine camera used.   I claim one FW.190 destroyed. W/O G. Maddaford."

After the war Maddaford returned to Hawera, working as a driver for Egmont Tourist Motors. He married Valmai Lenz. They had two children, Ray and Les. Glen passed away in 1977.