When the R.A.F started to increase its strength due to the happenings in Germany in mid 1935, the teaching of air gunnery and bombing became more specialised and a series of Armament Training Stations were set up around the British coast. The Chisel Bay and beaches were considered ideal for the practice ranges but the nearest flat land of appreciable size that was suitable for a support airfield was three miles north of Warmwell.

After preparing the grass landing ground in 1936, a small campsite and two Bellman type steel hangars were built at the south east corner. Conditions were fairly primitive to start with and canvas hangars and tents were in use for many months until the above facilities were ready.
The station was officially opened on the 1st of May 1937 under the control of No.25 Group of Flying Training Command, becoming the home of No.6 Armament Training Camp. A small number of permanent staff with several target towing aircraft such as Wallaces were in residence to cater for the many RAF squadrons that would arrive during the spring and summer months to take part in air to ground firing, and smoke bomb dropping.

As the war clouds gathered flying activity increased, and by mid 1938 the station was in use all year round, visited not only by R.A.F and A.A.F squadrons, but also by senior courses from flying training schools. By then the title of the establishment had been changed from a Camp to a School.

Flying was increased further in August 1939 when No.217 Squadron moved in temporarily with its Avro Ansons and started coastal patrols but soon left for the newly opened airfield at St Eval in October. However, the training of Observers for the expanding RAF was becoming a priority, and this resulted in No.2 Air Observer School arriving on the 3rd September from Acklington and joining the resident No.6 A.T.S. The two establishments were soon amalgamated and were retitled No.10 Air Observer School, by this time both air gunners and observer/bomb aimers were combined. The school had an equally mixed bag of aircraft ranging from Fairey Battles, Hawker Hinds, Wallaces, Avro Ansons, to the much larger but obsolete Overstrands and Harrows. 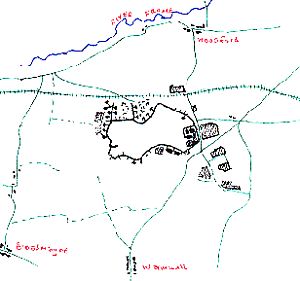 Warmwell in wartime was no place to carry out flying training so after changing titles yet again to No.10 Bombing and Gunnery School, the unit left for safer surroundings at Dumfries on the 13th of July 1940. However, previousto this in November 1939, the Central Gunnery School had formed here for the purpose of training air gunner instructors. It used a few Battles, Blenheims, Hampdens and Whitleys, and although it found things a bit difficult during the Battle of Britain period, it struggled along until departing to Castle Kennedy on the 23rd June 1941.

Back in July 1940 the airfield took on an additional role when it became a fighter base, acting as a satellite of R.A.F Middle Wallop. Work had already been put in hand to lay down a perimeter track, around which would be 8 Blister hangars and 18 fighter pens in revetments. Several additional communal and domestic sites were gradually provided in woodland to the east but these took a long time to materialise.
From July 1940 onwards Warmwell served as a busy fighter station under the control of No.10 Group of Fighter Command. It was in the forefront of the 'Battle of Britain' when its resident squadrons accounted for scores of enemy aircraft, especially when attacking the naval base at close by Portland. Over the next ten months the airfield itself took a pounding by the Luftwaffe bombers, which wrote off the sick quarters, the station workshops, and destroyed more than a dozen aircraft, some of them belonging to the Central Gunnery School. 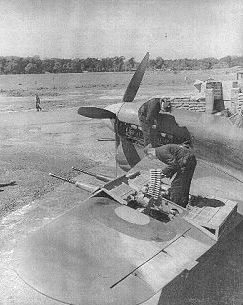 Spitfires and Hurricane equipped fighter squadrons were the most prominent to fly from Warmwell, but there was six months when the new Whirlwind twin engined fighter equipped one of the squadrons. By mid 1942 the accent was on offensive fighter sweeps over to France, and at one stage Hurricanes capable of carrying bombs operated from the station for over a year. In this respect Typhoon fighter/bombers also operating out of Warmwell, skipping back and forth to the Continent almost daily during 1943.

Since back in October 1941 a certain amount of air to ground firing had again been entered into by visiting fighter squadrons. This aspect increased in early 1943 as fighter pilots prepared and trained for the Invasion of Europe operation. To assist in this aspect No.1487 Target Towing Flight was present from 1st of November 1941 to September 1943 with its many Lysanders and Martinets. Numerous fighter squadrons came on short visits to take part in live firing practice on the Chisel Beech ranges.

Incidentally, a primitive landing ground at Chickerell had been used by Warmwell target towing, and the early type of fighter aircraft, since around 1937 when they could save time by refuelling and rearming whilst using the ranges.

In September 1943 a much heavier fighter aircraft appeared when the American Air Force sent in their 4th Fighter Group with over forty P47 Thunderbolts. They only partook in a special bomber escort mission so only stayed a matter of days but this was a foretaste of things to come. 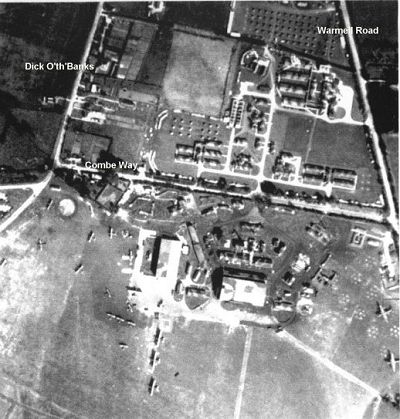 In early January 1944 the last of the many Typhoon equipped squadrons that had been based here departed. The station was then handed over to the American Ninth Air Force who gave it the title of U.S.A.A.F Station No.454. They needed further accommodations so until these were ready the only flying to take place was by the resident R.A.F Air Sea Rescue Flight, who had been here with its few Lysanders, Ansons and Walrus since forming on the 14th of May 1941.
On the 3rd of April the above ASR Flight departed because already thee American 474th Fighter Group with its huge fleet of P38 Lightning twin engine fighters had arrived in mid March. Bombing and fighter strikes against tactical targets in France commenced on the 25th of April, and were kept up almost daily through the invasion period and beyond, only ceasing on the 6th of August 1944 when the Americans left for an advanced air strip in Normandy.

The R.A.F returned in mid August when Nos.14 and 17 Armament Practice Camps moved in to once again host fighter squadrons using the Chisel Bank ranges. The station became under the control of No.11 Group and saw the presence of numerous fighter squadrons right through to the end of the war, all here temporarily whilst pilots brushed up their skills at air to ground firing. To give the region air sea rescue cover, ASR Flights of either Nos.275 of 277 were also in residence with their few Lysanders, Sea Otters and Spitfires. The odd fighter squadron equipped with Typhoons and Tempests kept coming over from Germany even after the war ended. However, when the last one, No.174 Squadron returned to Germany on the 19th of September 1945, the two Armament Practice Camps disbanded on the 24th of October when all flying came to an end. Although a C and M party remained for a short while to close the place down, the RAF eventually abandoned Warmwell airfield. The Ministry of Food took over the two Bellman hangars in 1950 for food storage and the rest of the airfield started to be dug up for the extraction of gravel. However, the old control tower lives on as it has been converted into a domestic dwelling. A housing estate has sprung up on the former domestic site.