Royal Air Force Odiham is situated in North Hampshire, 46 Miles south west of London. The nearest large town is Basingstoke 7 miles to the West. The airfield at Odiham originated in 1924 as a Summer Camp for Army Co-operation aircraft using a grass runway. The site was used for flying from April to September only, reverting to grazing land for cattle and sheep during the winter.
Under the Government's Air Expansion Scheme of the early 1930s, and after the acquisition of further land the air ministry authorised Lindsey Parkinson ltd to begin work on a 3 Sqn army co-operation airfield. work proceeded well and the airfield was ready for occupation by Christmas 1936, and on 18 October 1937 General Erhard Milch, Chief of Staff of the Luftwaffe, opened the new RAF Odiham! The first airmen of No. 4 Sqn under the command of Wg Cdr L O Brown DFC, AFC flying Hawker Audax had moved in to Odiham from Farnborough around February and the airfield now had its first permanent Sqn.

4 Sqn quickly converted to Hawker Hectors and No.13 Sqn who came from Old Sarum then joined them. The 2 units specialised in night reconnaissance and carried out many exercises with the local ack-ack sites. One problem experienced with Odiham was the lack of drainage through the grass, after particularly heavy rain the airfield became unusable, it was extremely important that something be done as heavier twin engine bombers were received and the threat of war loomed. 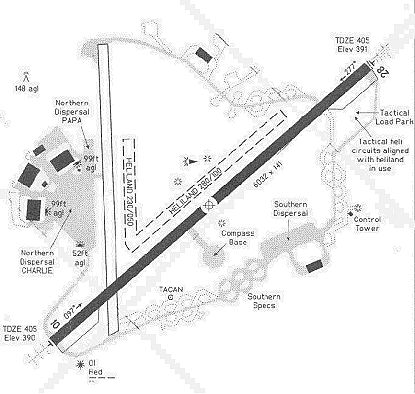 It became obvious that for Odiham to run it required a hard runway, thus Odiham became the first airfield to receive a concrete runway in the southeast. When World War II commenced, the resident Army Co-operation Wing (No 614 Squadron) moved to France, and No 225 Squadron, flying Lysanders, took possession of the Station. Free French, Belgian and Canadian training units, followed them. With the airfield now being on a war footing camouflage paint was applied to the majority of the buildings and it was planned that a decoy airfield was built at Froyle just 3miles to the south of Odiham. During May 1941 the runways were extended as Odiham transferred to No 71 Grp. And in January 1942 the arrival of W.A.A.F'S at Odiham caused accommodation problems, so as a temporary measure until further barrack blocks could be built a large Queen Anne house in Odiham high street known as 'the priory' was requisitioned.

In June 1943, Fighter Command took control of Odiham, flying Mustangs and later, Typhoons. On 'D' Day, the unit assumed a transit role for follow-up elements, and later became a Prisoner of War (PoW) Reception Centre. During the summer of 1945, a Canadian Transport Wing was formed in the United Kingdom, and for just over a year RAF Odiham became part of the Royal Canadian Air Force. Following World War II, came a long period of occupation by Fighter Command, when the skies above Odiham reverberated to the sound of many different types of aircraft, including Spitfires, Hunters and Javelins. In July 1948 six Vampires of No 54 Squadron took off from Odiham to make the first jet crossing of the Atlantic. One of RAF Odiham's most memorable days was 15 July 1953, when, as part of the nationwide Coronation ceremonies, the Queen and Prince Philip reviewed the Royal Air Force at Odiham. The static display comprised 318 aircraft, and another 641 flew past in salute. In July 1959 the Station reverted to "Care and Maintenance."

In February 1960 Odiham re-opened as part of Transport Command, and began operating helicopters, starting with the Sycamore, followed by the Whirlwind and then the Belvedere. The mainstay of the helicopter force at Odiham between 1961-1981 was the Wessex. In 1971, the Pumas arrived at Odiham, and in 1972, an Operational Conversion Unit (OCU) was formed to provide conversion training of helicopter crews for the Wessex and Puma Squadrons. In 1981, the Wessex left for RAF Benson, and their place was taken in 1982 by the Boeing Chinook helicopters. In June 1997 the operational Puma squadron moved to RAF Benson. The base finally became an all Chinook organisation when the last Pumas from the OCU departed to RAF Benson in February 1998.

The working population of the Station is about 1600, of which around 85 are servicewomen and 70 are civilians. Royal Air Force Odiham operates three Support Helicopter (SH) Squadrons, one containing a Conversion Flight. These flying units are supported by the normal three-wing structure of Operations, Engineering and Administration. Nos 7,18 and 27 Squadrons, equipped with the Chinook HC Mk 2, operate in support of NATO throughout Western Europe, or UK interests worldwide, providing direct support to the Army. The Squadrons also meet regular detachment requirements in Northern Ireland, the former Yugoslav Republic (FRY) and the Falkland Islands. No 27 Squadron additionally operates a training flight to convert pilots, navigators and crewmen to fly the Chinook for all the Odiham squadrons. A mixed Army/RAF Joint Helicopter Support Unit is also based at RAF Odiham and deploys with the squadrons to provide specialist under slung load support in the field.

RAF Odiham from the air. 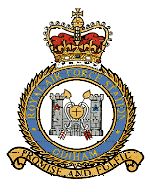 The Crest, signed by King George VI was presented to the Station in 1952. It symbolises King John's Castle at North Warnborough, and the Rose of Hampshire. The two crossed arrows represent the front-line Squadrons based at Royal Air Force Odiham. The Crest prominently displays the Station's motto, "Promise and Fulfil."