In 1940, Hurricanes from nearby North Weald shot down a Heinkel He111 Bomber, the Heinkel crashed on Farmland that was earmarked to soon become an airfield for the Royal Air Force. The dead crew members were interred in nearby St Dunstans Churchyard until being re-interred at the communal German Cemetery at Cannock Chase Staffordshire, the remainder were taken prisoner of war. RAF Hunsdon was built by several agencies or contractors, the main contractor for the Perimeter Track and Runway's were George Wimpey & Co Ltd, and most of the Building's were built by HJ Janes of Luton Ltd. Work was started on the 9th of October 1940 and the airfield officially opened on the 4th of May 1941.

The Main Runway was orientated E/W or 270/090 and the secondary runway NNE/SSW or 210 and 030 degrees. Main Runway length was 1,450 yards long, but extended by 300 yards to the east to a total length of 1,750 yards. The secondary runway was also extended by 200 yards to the south, a total of 1,450 yards. The extensions show up easily on the air ministry plans. Full Night flying capabilities were installed using DREM lighting as standard with an angle of approach indicator system installed.

RAF Hunsdon was used as a satellite landing field for nearby North Weald and became a significant airfield for the fledgling Night fighter force of the Royal Air Force. RAF Hunsdon was home to 85 Squadron and its charismatic Leader Group Captain Peter Townsend, who in later years was linked romantically with HRH Princess Margaret. 85 squadron flew Hawker Hurricanes in the early part of 1941 as a night fighter squadron, after a successful and fruitful campaign during the Battle Of Britain. The Squadron reverted to this role with their black painted Hurricanes to combat the increasing Luftwaffe raids on London and the midlands at night, guided by Ground radar with experienced controllers. The process was known as Ground Control Intercept or GCI. Later, 85 squadron were to change their Faithful Hurricanes for the twin engine Douglas Havoc and enjoyed success as a fully-fledged night fighter squadron before moving to West Malling in the county of Kent.

As stated, several aircraft types operated from Hunsdon, but by far the most numerous were the Mosquito's of the Royal Canadian Air Force, initially as Night fighter squadrons and then on "Intruder" operations. This type of operation involved aircraft from these special squadrons to orbit at a small distance known German night fighter airfields on the Continent and then engage German night fighters as they either took off or landed. Also, the RCAF squadrons were involved in the defence of southern England against the V1 flying bomb menace, 409 downing 10 of these and 418 is quoted as having destroyed a staggering 82 V1 flying bombs. On February 18th 1944, Mk 4s' from Nos. 21(City of Norwich), 464 (Australian) and 487(New Zealand) Squadrons that formed No 140 Wing (Wing Commander P.E. Pickard DSO DFC) carried out " Operation Jericho", otherwise known as the Amiens Prison Raid.

There were 9 separate sites that made up the entire airfield site of Hunsdon, No 1, to No 8, were technical or living accommodation sites, and the runways which is site No9, the original airfield plans lists sites 1 to 8, each containing around 20 to 33 or so buildings, mostly Maycrete, thorn, and nissen hutting. These buildings housed the camp cinema (350 seats) canteens, and ablution blocks, Motor transport sheds, and road fuel storage compounds.
Many of the other sites contained the NCO barracks, and Officers quarters, with the main Officers mess at the large country house of "Bonningtons", the DF station was to the west of the field, with the VHF station to the north, a separate sewage works with four buildings was also included within the sites.
Aircraft Hangers were of the "blister" variety of which there were 16 placed around the perimeter tracks, with one large Bellman Hanger in the main technical site on the northern side of the flying field. The runways were concrete with asphalt topping, the main No1 runway lays 270 /090 degrees, and the No2 runway lays 210 / 030 degrees.
In total there were 448 individual huts and buildings that made up the airfield, today you will find almost none, the last remaining Blister hanger has gone, not even the base remaining, the only seemingly unmoveable structures are the Pillbox type airfield defences
Former Station Commanders were
Wing Commander Harvey DFC
W/Cdr Peter Townsend DFC
W/Cdr Harvey DFC
W/Cdr J R A Peel DSO DFC
W/Cdr J S MacLean DFC
W/Cdr J Hamblin
W/Cdr John Cunningham DSO DFC
W/Cdr H M Kerr AFC
S/Ldr J G Saunders
W/Cdr A L Mortimer 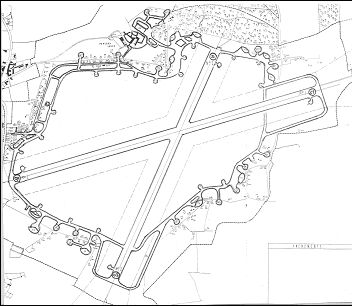