This very interesting photo was sent to the Webmaster by Paul Wilson. On the back it's written "CO's aircraft 1946". But what was the history of this colourful Tempest Mk. II? And who was the "CO"? Chris Thomas solved this mystery eventually. Read the story below! 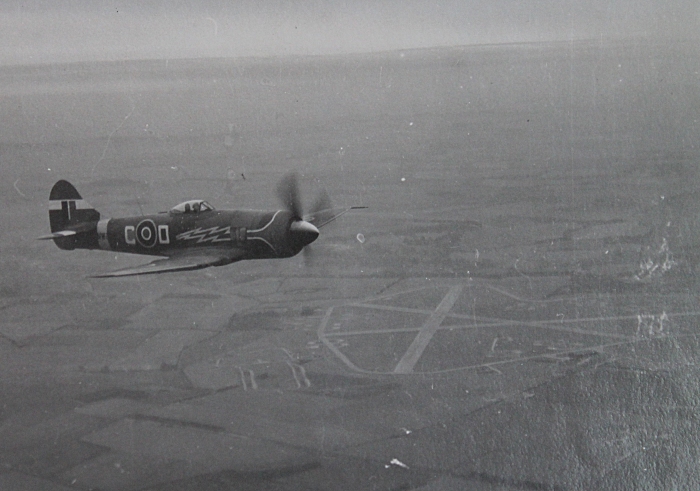 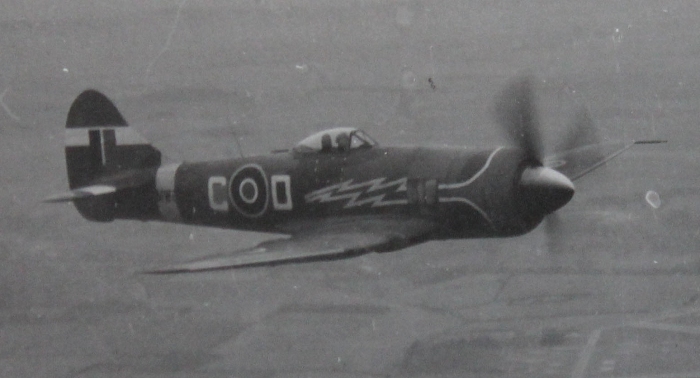 After a sort period of preparation at 13 and 20 MUs, MW835 was allocated to 247 Sqn at RAF Chilbolton where the squadron was in the process of converting (from Typhoons) to Tempest IIs, the second unit to do so. However, it seems that the Wg Cdr Flying, R.P.’Bee’ Beamont (of 609Sqn Typhoon and Tempest V-1 killing fame, and later Canberra, Lightning, TSR2 and Tornado test pilot) chose the aircraft for his own use as an accident report (forced landing following engine overspeed) and his log reveal that by 2 October 1945 MW835 was coded ‘R-B’ and now belonged to Chilbolton Station Flight.  According to ‘RB’ himself, his initials were split, one either side of the roundel, and the spinner was painted yellow, as per his earlier Typhoon and Tempest. However, on 24 October 1945 Beamont was posted to the Air Fighting Development Unit; his replacement, Wg Cdr Charles Harold Dyson DFC and bar, having arrived two days earlier. Dyson had vast and varied experience which extended from pre-war service with 33 Sqn, continuing with that unit in North Africa and Crete where he claimed an amazing 6 victories in a day.  After spending 1942 and half of 1943 as a test pilot in India he returned to the UK and the AFDU, followed by the Central Gunnery School, before commanding a number of armament related units, including No 2 Sqn of 3 Tactical Exercise Unit - the major training unit for Typhoon pilots going to the 2nd TAF in the latter half of 1944.

Dyson’s logbook for the period confirms that he first flew the newly-repaired MW835 on 5 December 1945.  It is quite possible that the photograph that started this research was taken the next day as ‘photography with Vengeance A/C’ is recorded in his log.  The photo clearly shows the previous codes had been overpainted and ‘C-D’ (not C-O as originally thought) applied, as well as the extraordinary lightning flash along the nose.  The colours in the drawing are speculative but match well with the tones visible in the roundel; as mentioned earlier, MW835 already had a yellow spinner.  Charles Dyson continued to fly MW835 though 1946, retaining the aircraft when Fighter Command was reorganised in April 1946, when he became Wg Cdr Flying Southern Sector, Middle Wallop.  Dyson was posted on a number of courses before becoming Station Commander at Church Fenton early in 1947.

In February 1948 MW835 went to 6 MU for what would be 11 months storage, before undergoing a year-long repair at Hawker and then storage at 20 MU before being sold to the Ministry of Supply in 1954 (probably for use Shoeburyness weapon tests).

Many thanks to Paul Wilson for bringing to our attention this Tempest in its startling and uncharacteristic scheme and to Wg Cdr A.S.Thomas and his colleagues at RAF Benson, Gp Capt HCA Cormack and MACR G Attridge.