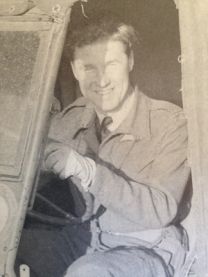 The Airstrip [at Newchurch] permitted the Royal Air Force and other Allied Forces to complete numerous, very worthwhile operational sorties, all of which contributed greatly towards helping in the defeat of the Allied Nations’ enemies in World War Two.

Our grateful thanks must also go to those farmers and landowners who owned that land on which the Emergency Landing Airfield was built for permitting the UK Government to use their ground for that latter period of the war.

Additionally, those thanks must also go to the local inhabitants in the Newchurch area for the welcome manner in which they readily accepted and greeted the large number of Service Personnel who were moved into their area, and possibly doubled the size of the population for the rest of the wartime period. Obviously that overnight swelling of its population must have caused considerable strain on the availability of all of its facilities necessary for everyday existence, which were already well stretched due to their lack in war-time. Their welcome was most appreciated by the Service Personnel located in the area. I am sure that I express the thoughts and feelings of everyone who was involved with the establishment and use of the Newchurch Advanced Landing Ground.

After Newchurch we were posted to Vokel Airfield in Holland. I was shot down by the enemy Ground Defences on 29th November 1944, resulting from an attack by my Section of aircraft on Osnabruck Aerodrome in North West Germany. My aircraft was very badly damaged by the opposing enemy Ground Fire that we encountered during the attack, but I managed somehow to nurse it away from the scene of the battle and head back towards our Base, which was at Volkel in Holland at that time.

I did not get very far from Osnabruck when my aircraft’s engine sized-up completely. I was much too low to bale-out and was committed to stay with the aircraft to make a Forced Landing. Unfortunately, it was all forest land at that stage of my passage over North West Germany and, as I was given to understand later, I managed to belly-land successfully in a bit of a clearing. However, it would appear that very shortly after touching-down the aircraft then nose-dived into a bomb crater that had been made by one of the Allies’ own Bomber Aircraft in the drive against the enemy. At that stage my aircraft came to a very abrupt halt, standing on its nose in a most undignified manner! The rapid stop also caused me, as its Pilot, major injuries, especially to my face, head and left arm. My right arm had been used on the Control Column to guide the aircraft in its descent and landing and I had placed my left hand up on the Gun-sight to protect my head in the whiplash that I knew would follow the high speed touch down in the forest land. But, I had not expected such a rapid halt to occur and it was the very intense whiplash that really caused me such major injuries as I did encounter.

I do not recall any aspects of the specific landing (touch down) itself, apart from also being fired at with Small Arms Weapons by Enemy Troops on the ground, who were still fighting our Advancing Allied Military Personnel in the forest land. However, I do remember talking to my Number Two Pilot from my formation which had attacked Osnabruck and who was still in radio contact with me, up to the time of the actual touch down. He was flying overhead, watching my progress and I informed him that I was about to make a forced landing in the forest. After making that comment on the radio I do not remember anything about the landing itself or anything immediately following it. Nor for a good long time after the crash landing, I have to add!!

Apparently, on his return to the Squadron at Volkel Aerodrome, that pilot reported that he saw me get out of my crashed aircraft and run away from it through the trees. With the injuries that I had sustained I cannot now comprehend how that last reported action could ever have taken place. I can only account for my lack of memory to the fact that I suffered from amnesia as a result of the head injuries I sustained in the crash landing. Perhaps the mind is kind to us in some ways by preventing us from remembering some of the nastier incidents during our lives?

In the very abrupt stoppage to the aircraft almost immediately following the crash landing the whole of my body must have been thrown violently forward against my very tightly pulled harness straps. Unfortunately, nothing could have prevented the whip lash effect to my neck and head which were unprotected and were thrown aggressively forward, crashing initially against my left wrist, hand and arm – all of which were severely flattened against the very static Gun-sight under that hand.

It would appear that I was picked up (from the crashed aircraft or in the forest? I know not!) by an advancing party of a Canadian Army Division. I did not learn that fact until some considerable weeks/months later. The rescue party hurriedly conveyed me to Brussels General Hospital, where I was given the necessary operational treatment for my injuries. Then after a week or two, I was flown back to England and became a bed patient in St Hugh’s Head Injuries Hospital, which was one of the University Colleges that had been taken over for war-time use by the Government.

Naturally I was visited at the hospital by my family and my wife (we had only been married for two months before that happened to me). My wife was asked by the doctors for some recent pictures of me, to give them a better idea of what I had looked like before my face and head became all pushed out of shape and how they would need to try to remould it. I was then in hospital care for almost a year being reshaped and made fit again. The treatment I received deserves nothing but praise. My new face and head were badly scarred at first, but after numerous hospital visits during the next few years, involving plastic surgery and skin grafts I think, I have a very good complexion with no apparent scarring now-a-days.

The aftermath of those injuries is that they have left me with no sense of smell and the movements in my left wrist are very restricted, but it is still quite usable. However, in recent years, following investigations into a trapped nerve in my spine with which I was being troubled, it was revealed in the X-rays that the upper section of my spine must have been damaged by the whip lash I had experienced all those years ago. Some of the upper vertebrae had crumbled, apparently causing the trapped nerve problem and also gave an explanation to my loss in height during recent years. Nevertheless, I was termed as fit to return to working duties after that very long spell of remedial treatment and I managed to talk the Air Ministry Posting Department into allowing me to return to full-time flying duties. The only proviso that was stipulated at that time was that I remained in the UK, so that the doctors could keep me under their close surveillance for the next year. Fortunately, no restrictions were imposed on the type of aircraft or altitude at which I could fly it or duties on which I might be called to undertake.

This stipulation meant that I could not request a posting back to my old Squadron, which was still operating in Germany and which I had hoped to rejoin, but I was able to obtain an appointment to an Operational Training Unit in Northumberland to assist in the operational training of new young Pilots on the Tempest and Typhoon aircraft for front line duties. That posting pleased and suited me well. I was a happy man again – “truly airborne once again!” 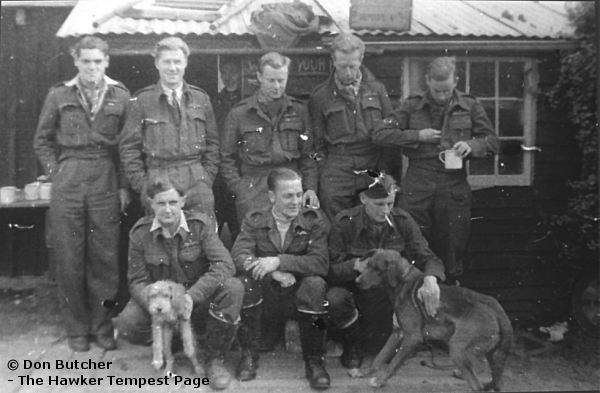 Ted Sparrow, second from left in back row.

A big thanks to Sandi at NewchurchVillage.org for the permission to publish this article!