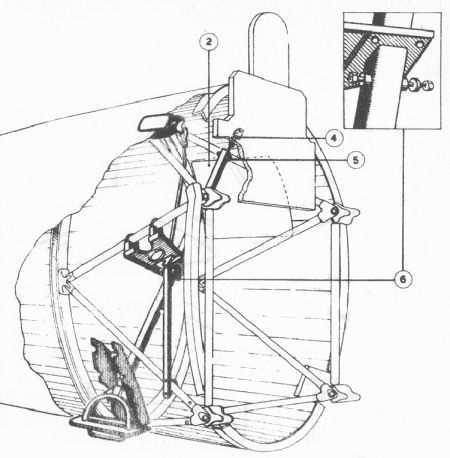 To assist in entering the cockpit, two footsteps and two handholes are provided on the starboard side. The first footstep used when entering the aircraft is retractable and employed in conjunction with a handhole in the monocoque to gain a foothold on the wing walkway. From there, access to the cockpit is obtained by means of a footstep at the lower forward corner of the emergency exit panel and a handhole in the upper part of the monocoque. When the retractable footstep is pulled downwards it loads an elastic cord and, at the bottom of its stroke, operates a trigger which trips the catch holding the spring-loaded cover over the handhole above. When the handhole cover is pressed back over the hole, the action releases the catch which has retained the footstep in the "down" position and it is returned into the fuselage under the action of the elastic cord. The remaining handbole and footstep are covered by spring-loaded doors which are flush with the skin when closed.