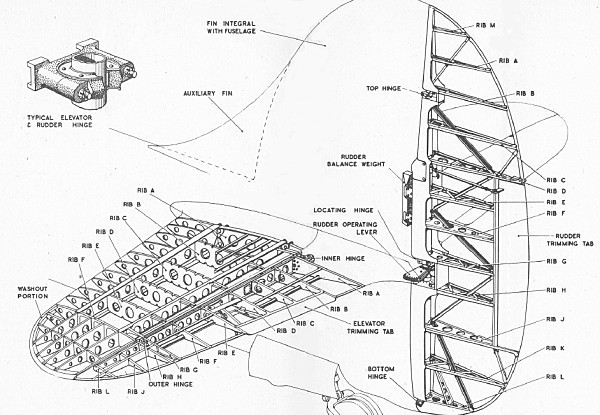 Each plane is tapered in plan and thickness and consists of two spars and a number of plate ribs covered with sheeting, the structure being almost entirely of light-alloy. The covering is reinforced with extruded angle-sections on the innerface, spaced approximately equally between the spars.

The spars comprise extruded T-section booms to which are riveted plate webs, lightened with circular flanged holes. In the case of the rear spar the aft arm of the T-section boom is cut-away to form an L-section from one third of the section outboard. At their rot ends the webs are reinforced with plates and fitted with high-tensile steel fittings carrying studs for attaching the plane to the fuselage. The spars extend from the root end rib to the semi-circular tip or washout. In this washout portion the spars are continued by tapered tip portions which are similar in construction to the normal inter-spar ribs. Two similar tapered sub-spars are approximately equally spaced between the tip portions of the spars

Except for the root rib, the washout rib and the washout attachment rib, the normal inter-spar ribs are made from single sheets of light-alloy flanged along their upper and lower edges and cut away to accommodate the angle-section stringers riveted to the inner face of the skin. Extruded angles are riveted to the ends of the ribs to provide means of attachment to the spars. Each rib is li ht g ened with three circular flanged holes, and is stiffened by means of two rolled Z-section stiffeners.

The inner end rib has extruded T-section booms with a plate web: the washout attachment rib also has similar booms, and the web is lightened to a girder pattern, the verticals and diagonals being reinforced with rolled Z-section stiffeners.

The washout rib is made in five portions, which include a nose and a tail portion, the breaks occurring at the front and rrar spars and the two sub-spars.

With the exception of the root rib and the washout attachment rib, the nose ribs are constructed from flanged light-alloy sheet in a similar manner to the normal inter-spar ribs. The rook rib has booms of extruded T-section with a plate web and the washout attachment nose rib has channel-section light-alloy booms and channel-section girder-bracing. The nose ribs are fitted in line with, and midway between, each inter-spar rib.

Attached to the rear face of the rear spar, and in continuation of the ribs, are light sheet-metal formers supporting the skin aft of the spar and providing a support for the nose shroud of the elevator. The shrouding is made in two portions, one past being from the elevator inner hinge to the outer hinge at the washout attachment rib, and the other part in the washout portion. Light-alloy bearing blocks for the elevator hinges are bolted between double formers at the root rib and the outermost rib.

A single inspection door, attached by six screws, is situated just inboard of the washout attachment rib approximately mid-way between the spars. As the two tail planes are interchangeable and identical, the inspection door is in the upper surface when on the port side and in the lower surface on the starboard side.

Each elevator has a channel-section main spar incorporating nose ribs and nosing. Flanged sheet metal ribs are incorporated, the whole structure being of duralumin with the exception of the skin covering aft of the spar, on early aircraft, which is of Elektron sheet stiffened with stringers parallel to the main spar. On later aircraft the entire skin covering is of duralumin sheet. Additional stiffness is provided in the washout portion by two short sub-spars of the plate rib type. A trimming tab in the trailing edge is operated by a handwheel in the cockpit.

The spar assembly is, in section, an isosceles triangle the base of which is vertical and consists of a heavy-gauge channel spar with its flanges turned rearwards; the apex of the triangle is forward of the base and the two equal sides are formed by a single sheet of light-gauge metal, folded at the apex and riveted to the flanges of the base; these sides provide an aerodywmlc balance. The whole is stiffened by means of a number of internal ribs at the points of attachment M the main ribs, with one additional rib to provide a fairlead for the elevator tab control cables. The spar tapers from the root to the tip, a sub-spar being fitted at a position 3 in. aft of the main spar outboard of the outer hinge.

The ribs consist of flanged plate webs and are cut away to clear the stringers where the latter cross the ribs. The larger ribs, towards the root end, are lightened with circular flanged holes.

The hinge spools are high-tensile steel fittings. The outer spool is situated between two closely-spaced ribs, to the webs of which is bolted through flanges at each end. The inner spool is in the form of a spigot, bolted through its flange to the inboard rib of the elevator; the spigot is forked at its inner end and engages with the end of the elevator countershaft which projects through the monocoque skin and to which it is connected by a single bolt. Each hinge assembly consists of needle roller bearings housed m a base block and cap which contain the elevator spools. Retaining rings are utilised to locate the rollers laterally. The cap and block are held together by two distance tubes which are forced into them at the elevator attachment holes; these holes pick up with the attachment studs on the tail-plane. The needle bearings are packed with lubricant and a grease nipple is incorporated on each hinge for lubrication in service.

A trimming tab is provided in the trailing edge of each elevator. The tab is formed from a single sheet of light-alloy bent to the required profile, and is reinforced by four internal wooden former5 attached with woodscrews. The tab is held in place at each end by a projecting spigot which engages with a bush mounted on the web of the adjacent rib.

The rudder is fabric covered and is mass-balanced by a lead weight mounted forward of the spar approximately mid-way along its length. The structure consists of a spar conneded by ribs to a nosing and a trailing edge, the latter being interrupted towards the centre of the rudder to accommodate a trimming tab. Five diagonal flanged channel-section stiffeners and one diagonal tubular stiffener brace the spar to two points at the trailing edge and two points at the trimming tab cut-away. An additional diagonal stiffener, comprising a flanged plate web with flanged lightening holes, is fitted between the spar and the bottom rib, Immediately above and below the cutaway for the tab in the trailing edge, on later aircraft, small stay tubes have been added to stiffen the rudder locally. The bottom edge of the rudder consists of a detach-able fairing which, when removed, by withdrawing ten screws, provides access I to the lower hinge.

The spar is constructed, in three pieces, from steel tube, the joints being effected at thb top and centre hinge spools which are bolted into the ends of the spar sections. The bottom hinge spool is similarly fitted to the bottom of the spar. Spools for the attachment of tail ribs are sweated on to the outside of the tube. At each attachment spool except the lower one a semi-circular nosing rib is riveted; at the lower spool, however, the nose rib is integral with the tail rib extension. At four points along the spar, eyebolts are fitted for the attachment of the diagonal stays, and two brackets for the mass-balance weight are fitted above the centre hinge. The trimming tab operating gear is situated just above the mass-balance weight brackets.

The nose fairing is constructed from light-alloy sheet in three portions. the cross-section being an arc about the spar centre-line. The upper portion extends from the top of the rudder to the top hinge, the middle portion between the top and centre hinges, and the lower portion from the centre hinge to the bottom hinge. The nosing is riveted to each of the nose ribs mounted on the rudder spar.

The ribs are constructed of light-alloy and, except the lower one, all have M-section booms: the majority are diagonally braced by tubular members riveted inside the booms. Ribs D, F, and J, however, have plate webs pierced with flanged lightening holes and are additionally stiffened with transverse channel-section members. Rib L is a flanged plate rib having three flanged lightening holes and is the only rib which includes the nosing rib in its construction. At all the other ribs, the corresponding nose rib is of semi-circular form, constructed separately from flanged-up plate and riveted to the spar spools and rib booms.

Three hinge assemblies are provided for the rudder. The top hinge is just below the third rib from the top of the rudder, the centre (locating) hinge is between the eighth and ninth ribs, and the bottom hinge is below the bottom rib. The hinges consist of needle roller bearings housed in a base block and cap, retaining rings being utilised to locate the rollers laterally. The cap and block are held together by two distance tubes which are forced into them at the rudder attachment holes; these holes pick up with attachment studs in the fin and with studs on brackets attached to the sternpost and rudder shrouding. The needle bearings are packed with lubricant and a grease nipple is incorporated in each hinge for lubrication in service.

The rudder trimming tab is of steamline section and is constructed of light-alloy skin riveted to a channel-section spar which runs the entire length of the tab, being broken only at the operating lever. The tab is stiffened internally with light-alloy ribs which are riveted in position. A mild steel plug-end fits inside the skin at each end of the tab and is drilied vertically to receive the hinge pin, and slotted and drilled horizontally for the hinge pin fixing rivets. The hinge bearings are formed by oilite bushes in the upper and lower trimming-tab bay ribs; a hinge pin fits into each plug-end at the end of the tab and is initially positioned by a tubular rivet passing through locking plates and the slotted hole. The hinge pin is capable of sliding stiffly in the slot and, on assembly with the rudder, is pushed into the oilite bushes in the ribs until the remaining holes of the locking plate line up with the drilled hole in the plug-end; another tubular rivet at this point locks the hinge pin in position. 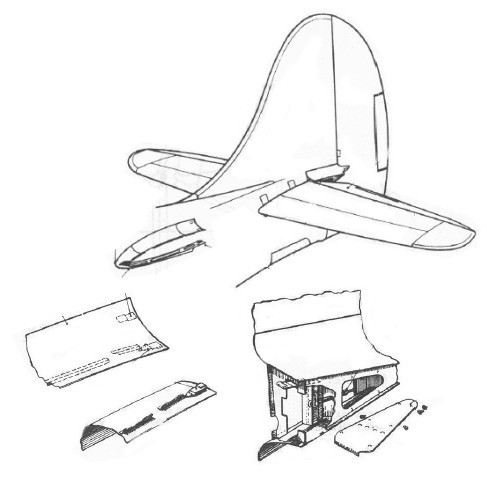