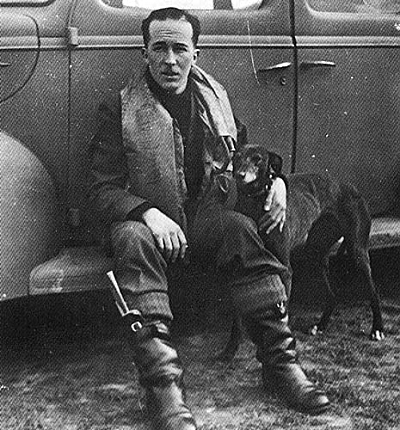 Bob Spurdle, born in Wanganui on 3 March 1918, attended Wanganui Collegiate School before being accepted early in 1939 for the last short service commission course.

Training completed, Spurdle sailed for Britain in early June 1940 to attend a Spitfire Operational Training Unit before joining 74 Squadron on 21 August. Spurdle shared in the damaging of an He III on 14 September. Five weeks later he had a narrow escape when his Spitfire broke up in a high speed dive whilst chasing a Bf 109. He baled out and was attacked by a German fighter as he floated down to a safe landing.

Spurdle destroyed five enemy fighters, probably three more and damaged a further four plus several probably destroyed bombers before he was posted in mid-April 1941 to join 91 Squadron. He probably destroyed another Bf 109 on 7 May and damaged another on the 23rd.
He then volunteered for the Merchant Ship Fighter Unit, formed to provide Hurricane aircraft and pilots for service on catapult-armed merchantmen in order to combat long-range Focke Wulf Condors harassing Allied convoys in the Atlantic. Spurdle made two trips to the USA in the Camships 'Novelist' and 'Eastern City' but saw no action.

In February 1942 he rejoined 91 Squadron and was made a flight commander in April. On 25 July he destroyed a Bf 109 and the next day an FW 190. Spurdle visited the latter's pilot in hospital and discovered that he was credited with the destruction of seventeen British fighters. With another FW 190 damaged on 28 July and a Bf 109 damaged on 3 August Spurdle was awarded the DFC. Scheduled to be posted to Malta, he was found to be 'operationally tired' and was sent on anti-aircraft co-operation duties to await a ship for New Zealand, where he would be attached to the RNZAF.

At Ohakea Spurdle organised and commanded the Camera Gun Assessing School until May 1943 when he was appointed as 'A' flight commander with 16 Squadron, then preparing for its first tour of duty in the Pacific. The pilots were flown to Santo in the New Hebrides in transport aircraft, and the Kittyhawk-equipped unit moved to Guadalcanal in mid-July 1943 to escort American bombers attacking Japanese bases. Spurdle shot down a Hap fighter on 13 August; on the 25th he and another pilot sank three Japanese motor torpedo boats and damaged barges, and the next day he destroyed a Zeke fighter and damaged another.

After returning to the United Kingdom Spurdle was posted to 80 Squadron in March 1944, became a flight commander in May and took command completely in July. The unit crossed to the Continent in September, where it joined 122 Wing.

On 8 December 1944 Spurdle damaged two Ju 188's in what was to be his last encounter with the Luftwaffe. He came off operations in early January 1945 at the end of his fifth tour and was awarded a Bar to his DFC.

Spurdle volunteered to be a Radio Control Officer and was attached to the 6th Airborne Division, flying by glider into Germany in charge of the three RAF ground control units, two of which were wiped out. He then joined the 11th Armoured Division motoring by tank to the Elbe River and directing the 'Cab Rank' fighters onto targets requested by the Army. The war over, Spurdle was repatriated to New Zealand.

As far as is known Bob Spurdle, John Gibson and Michael Herrick were the only three New Zealand pilots to destroy enemy aircraft in both the Battle of Britain and the Pacific.