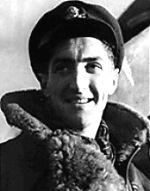 Keith "Hyphen" Taylor-Cannon, from Oamaru, was born on December 1921. He received his secondary education at Alexandra District High School and applied for enlistment in the RNZAF in October 1940, whilst still at school.

He joined the RNZAF on 13th April 1941, and was posted to the UK on completion of training. After further training on Hawker Hurricanes with No. 56 Operational Training Unit he was posted on the 24th March 1942 to No. 486 (New Zealand) Squadron as a Sergeant.

By October, 486 Sqn was re-equipped with Typhoons and based at Tangmere. During February 1944 "Hyphen" was posted to No. 4 Tactical Exercise Unit at Annan. By the end of his first operational tour he had completed 256 operational flights with 486 Sqn, including patrols, sweeps, escort missions, convoy patrols and attacks on enemy shipping. Taylor-Cannon was awarded a DFC on the 22nd March 1944.

After this rest from operations, he returned to 486 Squadron in early August 1944. This Squadron were now based at No. 150 Airfield near Newchurch in Southern England, flying Hawker Tempest fighters in pursuit of V-1 flying bombs. 'Hyphen' shot one of these down on the 15th August 1944. A move in late September saw the squadron based on the continent, firstly at Grimbergen and then Volkel. The German Messerschmitt Me-262 jets were now making a nuisance of themselves and Taylor-Cannon half shared one of these with PO Owen Eagleson on 19th November. He half shared a Junkers Ju-188 on 26th November and destroyed a Focke-Wulf 190 of 10/JG54 on 27th December.

He was promoted squadron commander of 486 Squadron in the middle of February 1945 and shot down a Me-109 North East of Bramsche on the 24th February. Taylor-Cannon was awarded an immediate bar to his DFC in March. Squadron Leader Taylor-Cannon, on his 361st operational flight, was leading a formation of Tempest aircraft north west of Dömitz on the 13th April 1945. While attacking motorised enemy transport, his aircraft (SA-F, SN184) received almost a direct hit by an 88mm anti-aircraft shell. He was seen to bale out and come to rest on the East side of the River Elbe near the village of Denmatz. However, he was not amongst those released at the end of the war, and was presumed to have been shot by the Volkssturm (German home guard), although reports also suggest he did not survive a heavy landing due to the height of his bale-out.