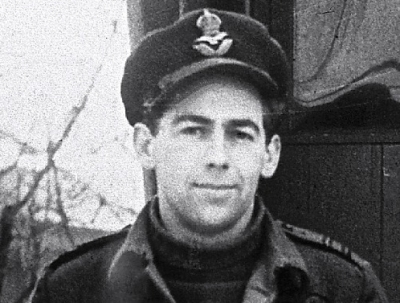 Keith Frederick Thiele was born in Christchurch, New Zealand, on 21 February 1921 and educated at Christchurch High School for Boys. After a brief spell as a reporter on the Christchurch Star-Sun he joined the RNZAF to train as a pilot.

His career as a bomber pilot began in October 1941 when he flew Wellingtons with No 405 Squadron. Returning from a raid on Cherbourg in January 1942 he had to make a crash-landing in his damaged aircraft. After converting to the four-engine Halifax, Theile flew on the first “Thousand Bomber” raid to Cologne and the second to Essen a few days later. His Halifax came under heavy attack but he successfully weaved his way through the searchlights and anti-aircraft fire.

After completing 32 operations, 11 on the Halifax, Thiele was rested and awarded the first of his DFCs. His obvious leadership qualities were soon recognised and he was promoted directly from flying officer to squadron leader. Instead of completing the customary six-months rest, he volunteered to return to operations after just two months when he was posted to No 467 Squadron to fly Lancasters.

En route to attack Berlin he pressed on to the target despite two of his crew having to attend to a sick colleague. On another occasion he returned from a target at low level to allow his gunners to engage the enemy’s searchlights and anti-aircraft defences. In March 1943 he attacked Nuremburg. An engine caught fire on the outward journey but he continued to the target. A month later he attacked Stuttgart when his Lancaster was badly damaged and he had to make a forced landing on two engines and one main wheel at an airfield on the south coast. He was awarded the DSO for his “outstanding courage”.

On his 56th operation he attacked Duisburg on the night of 12 May 1943. As he approached the target his Lancaster was hit by flak but he pressed on and held the bomber steady. Over the target, the aircraft was hit again, completely destroying an engine. He had just stabilised the aircraft when another shell disabled a second engine, damaged the cockpit and wounded Thiele and another crew member. He regained control and headed for England steadily losing height. He made a crash landing at an airfield in Norfolk without injury to his crew, an action which resulted in the award of an immediate Bar to his DFC. The citation highlighted his “exceptional valour and skill”.

At the end of his tour, he was offered command of No 617 Squadron to replace Guy Gibson but Thiele, the thrice-decorated 22-year-old squadron leader, turned down the opportunity because he was determined to fly fighters. For a period after completing his tour with No 467 Squadron, he ferried Canadian-built bombers across the Atlantic. In February 1944 he achieved his ambition to be a fighter pilot when he converted to Spitfires, then joined No 41 Squadron based in southern England.

Over the next six months he flew 100 operations escorting light bombers and on cross-Channel sweeps to attack ground targets including operations on D-Day. As the V-1 flying bomb campaign opened, he flew “anti-Diver” patrols over Kent and shot down one of the terror weapons.

He joined No. 486 (NZ) Squadron in October 1944 to fly Hawker Tempest. He then joined No. 3 Squadron, in the same wing, and completed another 50 operations with the squadron attacking enemy transports in Holland and Germany. During ground strafing operations, he destroyed two Luftwaffe transport aircraft, damaged 14 locomotives, numerous barges and motor transports. He was also successful in the air and in December he shot down two Messerschmitt Bf 109s.

In early January 1945 he was given command of No 3 Squadron. He continued to attack ground targets but on 10 February during an armed-reconnaissance sortie he was hit by ground fire over Paderborn and was forced to bale out. Slightly wounded, he was taken prisoner and received some rough treatment, but he was only held captive for a few weeks before escaping from a transit PoW camp near Frankfurt. On 31 March, he and a colleague slipped away on bicycles and later “acquired” a motorcycle. They crossed the Rhine on the bridge at Remagen before reaching US ground forces. He returned to his squadron but was not medically fit for further operational service. A few weeks later, he was awarded a Second Bar to his DFC, one of only 50 awarded during the Second World War.

Thiele returned to New Zealand and, after a brief spell as a journalist, he began a long career as an airline pilot. He then moved to Australia and became a senior captain with Qantas.

An avid adventurer, Thiele twice had his tiny yacht Spitfire smashed by mountainous waves during sailing excursions on the notorious Tasman Sea, yet managed to sail home. He later built and operated a marina in Sydney and, aged 80, sailed his own yacht across the Tasman Sea to see New Zealand’s first America’s Cup defence.