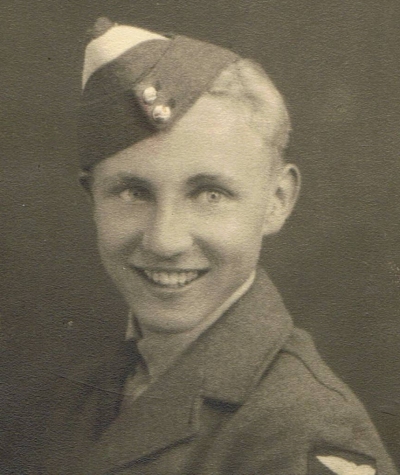 Peter "Pete" Leopold Godfrey, born in 1923, was from Ickenham, Middlesex. He was educated at Harrow County School for Boys at nearby Harrow on the Hill and was an excellent sportsman, joining his local cricket club at Ickenham, where he was described as an outstandingly good wicket keeper.

Godfrey joined the RAF in 1941 and after his pilot training he joined 80 Squadron. At that time based in North Africa as part of the Desert Air Force but later to move to Italy. Before returning to the UK in April 1944 in preparation for Operation Overlord, the squadron re-equipped with the Spitfire Mk IX fighter. In September 1944, the squadron once again re-equipped, this time with the Hawker Tempest Mk V.

On 17 September Operation 'Market Garden' was launched. 80 Squadron took off from it's base at RAF Manston at 11:30, tasked with flak-suppression duties over the Walcheren and Schouwen Islands. The squadron's War Diary records "Several guns were silenced.....One armed barge was attacked and left burning, whilst four others were damaged." The diary then goes on to record that "Flak was plentiful and Tempest EJ519 piloted by W/O P.L. (Pete) Godfrey was hit. He was not seen to bale out and aircraft was seen to crash into the sea."