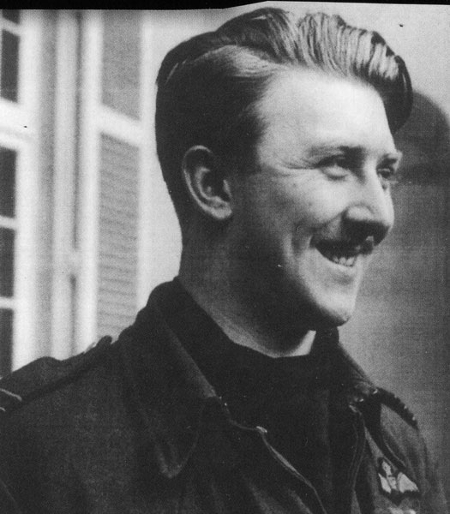 Digby Vawdre Cartmel Cotes-Preedy was born on 29 June 1920 and attended Haileybury School. He joined the RAF on a short service commission and began his training on 6 March 1939 at 8 E&RFTS Woodley. He went on to 14 FTS Kinloss on No. 1 Course, which ran from 13 April to 6 November 1939.

With his training completed he joined 236 Squadron at Stradishall on 8th November. Cotes-Preedy served with the squadron in the Battle of Britain until 21 August 1940 when he was detached to Farnborough for a High Altitude Flying Course.

Back with 236 Squadron on 6 November 1940, he claimed a He115 floatplane destroyed. It was actually a Breguet XI impressed into service with the Seenotdienst, the German air-sea rescue service.

On 29 January 1941 Cotes-Preedy was the pilot of Blenheim IV V5432 ND-A which suffered an engine failure when taking off from St. Eval for a reconnaisance to Brest. It struck a tree and then crashed into a hill and caught fire. The observer, Sgt. Woodland, had been thrown out. Cotes-Preedy forced his way out and found Woodland lying in burning petrol. He dragged him clear, rolled him in the grass to extinguish his burning clothing and then returned to the aircraft to look for Sgt. Shields, the air gunner. Finding the escape hatch jammed, he ripped aside the side of the fuselage and dragged the gunner out by his head. Although injured and suffering from burns himself, he had saved the life of the gunner and also probably the observer.

Cotes-Preedy was awarded the George Medal (gazetted 5 May 1941).

After recovering from burns and a fractured spine he was posted in June 1941 to 59 OTU Crosby-on-Eden as an instructor. He moved to 61 OTU Heston in February and was briefly with 610 Squadron at Hutton Cranswick in March 1942 before joining 609 Squadron at Digby later in the month as a Flight Commander.

Posted away to the Air Ministry in September 1942, Cotes-Preedy served in the Directorate of Fighter Operations until November, when he went to the Gloster Aeroplane Company, as a production test pilot.

When his third operational tour ended in February 1944, Cotes-Preedy went to the Napier Aero Engine Company, Luton, as a test pilot. He joined 56 Squadron at Newchurch in June 1944. On 3 and 12 July he destroyed two V-1 flying bombs.

Cotes-Preedy took command of the squadron at Grimbergen, Belgium in September and on the 29 he destroyed a Fw190 in the Emmerich area.

He was awarded the DFC (gazetted 3 November 1944) and was posted away to 83 Group Control Centre in the Netherlands in February 1945.

From early June Cotes-Preedy was serving with 616 Squadron at Lubeck until he was sent to the BAFO School of Offensive Air Support in August 1945. He returned to the UK in October and was briefly at HQ Fighter Command before going to the Central Fighter Establishment at West Raynham.

He was released from the RAF on 28 January 1946 as a Squadron Leader and returned to work for the Gloster Aeroplane Company as a test pilot. In 1951 he was appointed Chief Test Pilot of the Aviation Division of the Dunlop Rubber Corporation.