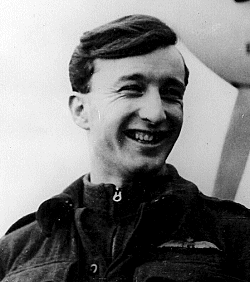 Flight Lieutenant Walter "Jesse" James Hibbert was born on 12 July 1920 in Croydon. Hibbert was educated at Croydon’s Selhurst Grammar School for Boys and left school to work for a local engineering firm who were sub-contractors to engineers Vickers. Later, through his knowledge of metallurgy, he moved to High Duty Alloys in Slough.

As he was in a reserved occupation and the recruiting age had been raised to 20, it was September 1940 before he was accepted for the RAF. He learned to fly at the Service Flying Training School in Moose Jaw, Saskatchewan in Canada, before going to 56 Operational Training Unit in Sutton Bridge, Lincolnshire. His first posting, in July 1942, was to Castleton in Caithness, where 124 Squadron was based, before his squadron moved to RAF Biggin Hill in Kent.

He was then posted to Malta, as reinforcement during the siege of the island, where he joined 126 Squadron. It was while serving there that his plane came down in the Mediterranean Sea. He managed to land the aircraft afloat on the water and get into a dinghy, where he languished for several hours before being rescued by a fishing vessel.

Then in March 1943 he contracted polio and was due to be invalided out of the service. He was told he would not fly again but he had the advantage of being an extremely fit young man and fought off the debilitating disease to make a full recovery and resume active duty. He was posted to 53 Operational Training Unit in Wales before going to Central Gunnery School at Sutton Bridge and then Junior Commanders’ School.

He rejoined 124 Squadron in December 1943 and remained with it until September 1944, taking part in air cover for the D-Day Landings and claiming his second victory – a Messerschmitt Bf 109 – over the Channel in the aftermath of the 6 June operation.

The following month he joined 274 Squadron as a flight commander, flyinig Tempests. During one mission he came down behind enemy lines but again he managed to extricate himself and make his way safely back to base by travelling across country.

When he claimed a kill on 17 December, 1944, he reportedly recorded in his combat notes:

“I was flying Red 3 on a fighter sweep to Rheine and on our return when south-east of Emmerich, flying west at 3,500, we ran into three Me 109s flying south-east the same height as ourselves. A dogfight ensued over a small town from which we received considerable flak. I saw one Me 109 go down and explode… then saw another Me 109, which had gone into cloud at 4,000ft, come out of cloud. I gave chase and he dived down weaving slightly. I followed at 400/500 yards and as I began to gain on him he steepened his dive and went straight into the ground crashing near Holdern.”

Hibbert also took part in air cover for the liberation Holland and when his commanding officer, Squadron Leader David “Foob” Fairbanks was shot down in February 1945 and taken prisoner of war, he became CO until April 1945 when he was awarded an immediate DFC, his citation commending him for completing a very large number of sorties, destroying four enemy aircraft and setting “a fine example of resolution throughout”.

When the war in Europe ended he was posted to Burma and then on to Saigon where he commanded 273 Squadron and took the surrender of a Japanese squadron when he was presented with the family sword belonging to its defeated squadron leader. Hibbert, who by this time had earned his ace status with a total of six kills, was personally commended by Lord Mountbatten for his services in the Far East. 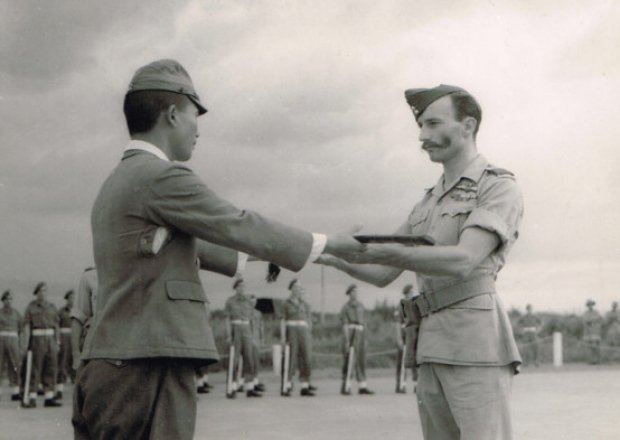 Squadron Leader Walter Hibbert receiving the surrender of a Japanese squadron in Saigon.

During the late 1940s and the 1950s he served at a number of RAF stations, including a spell in Cyprus, and at RAF Shawbury where he flew Vampires. Throughout his career he had flown a huge variety of aircraft including Mosquitos, Spitfires, Hurricanes and Tempests and was said to be able to fly so low that he could thresh a roll of paper, staked in the ground, with his Spitfire propeller.

After training for several months in Arizona in the Unites States, he concluded his time with the RAF at North Luffenham, in Rutland, when his duties included being a key holder in charge of the Thor Missiles based there during the Cold War and the responsibility of responding in the event of a nuclear war.

After retiring from the RAF in 1961 he went to work in the City of London, in charge of administration for chartered accountants Moore Stephens & Co and later for another accounting firm that subsequently became Ernst and Young.

He then went into partnership with a firm of insurance loss adjusters specialising in damage claims for personal injury and later established his own business assessing lifetime requirements for people with brain and spinal injuries and presenting evidence in court for compensation claims.