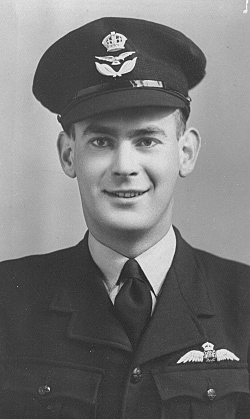 Roy Campbell Kennedy was born 4th November,1922 at Korong Vale,Victoria, Australia. He was the youngest of the family with 9 brothers and sisters,growing up on the family farm.

Following his schooling in Bendigo,Victoria he was employed by a Chartered Accountancy firm,then in June 1941 he enlisted in the Royal Australian Air Force as a LAC. In October,1942 he received his coverted “wings” and was granted a commission as a Pilot Officer. He volunteered to serve with the RAF and arrived in England in December, 1942. Refresher and conversion courses were initially undertaken followed by advanced training and graduating from Hurricane, Spitfire & Typhoon courses in 1943/44.

Roy’s first flew a Tempest (EJ749) on 23rd October, 1944 whilst with No.83 Group Support Unit, Thorney Island, Hampshire. (Entry in his Flying logbook). After 7 hours flying the Tempest he was attached to 274 Squadron (122 Wing) Volkel, Holland arriving on 4th November, 1944, being his 22nd birthday. The next day saw his first two flights with the Squadron, patrols of Grave (JJ-A) and Nijmegan (JJ-E).Operational hours for November,1944 totalled 14 hours mainly patrols of Nijmegan, Deurne, Grave, Lingen and Bohmte areas.

Roy was slightly injured in the right foot when hit by fire from a Bf109 in a major engagement at Gutersloh on 23rd January,1945. Whilst on armed recce they were attacked by 20+ 109 and 190’s and in the ensuing battle F/Lt.Mann claimed 2 , F/Lt Wood & F/O Scriven both claimed a victim each.

February 1945 was a heavy month, mostly armed recces covering such areas as Arnhem, Minden, Dumner Lake, Wesel, Rheine, Gutersloh, Lingen etc. On 24th February 45 flying NV639 (JJ-C) listed as “Foobs Milk Run to Rheine”, Roy damaged a ME262 and then got a half share in a JU-88 with F/O F.W.Mossing.

March 1945 was again patrols, armed recces and sweeps. The last few entries in Roy’s logbook were completed by the Squadron.

Records show that he was hit by flak and killed when his plane crashed. Three Tempests took off at 0600 that morning and as well as Roy being killed F/Lt.W.J.B.Stark (OC A Flight) was also killed near Plantlunne airfield (Wesel), probably by flak, although German Ace Erich Rudorffer of Stab1 JG 7 claims him as his victim number 214.

F/Lt Kennedy was killed approx. 7 weeks before the end of the war, aged 22 years. He is buried at Reischwald Forest War Cemetery, Kleve, Germany.

(Kennedy is buried next to Flt.Lt. Malcolm F Edwards. Edward in 14.A.13 & Kennedy in 14.A.12. Both were Tempest pilots, but different squadrons and were killed approx. 3 months apart.)