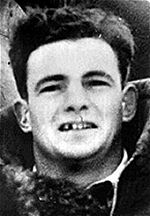 Harold Watson Longley was born in 1921. After completing his flying training he was posted to the United Kingdom.

In 1943 he joined 488 Squadron on night defence duties but by the end of his operational tour in August 1944 he had not achieved any successes. Longley was posted to No.3 Squadron at Volkel in Holland in early January 1945, to fly Tempests. On the 23rd he shot down a FW 190 ten miles west of Gutersloh.

On 1 May 1945 Longley, now a flight commander, shot down a Ju 88 near Schwerin. Two days later he shared in the destruction of a Fieseler Storch at Plon and destroyed a Ju 52 on the ground. In the final days of the war Longley destroyed a Bf 110 on the ground, a Do 24 moored in the sea while damaging another, and also damaged two He 115 floatplanes.

In July 1945 he was awarded the DFC, being then credited with three enemy aircraft destroyed, four damaged and having taken part in the destruction of some fifty locomotives.
Longley died in Nelson in late December 1992.