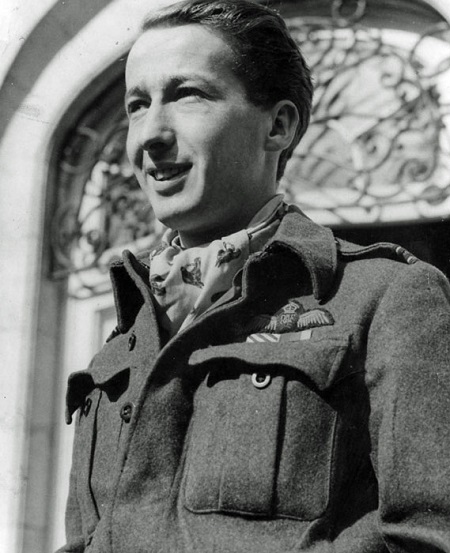 Arthur Robert Moore was born in Reading on 15 October 1919. He went to Reading School and turned down going to university in favour of joining the RAFVR. He commenced training on 3 June 1939 at 8 Elementary & Reserve FTS Woodley near Reading on the Miles Magister and went solo on 2 July.

Further training on the Tiger Moth was carried out at 7 E&RFTS Desford starting in November. Leaving there with an 'Above Average' rating Moore went on to 10 SFTS Tern Hill for No. 19 Course, which ran from 11 April to 24 July 1940. Again gaining an AA rating on the Harvard he arrived at 5 OTU Aston Down on 3 August to convert to Hurricanes, his logbook shows a first flight in Spitfire L1071 at Turnhouse on 6 August. He then joined 3 Squadron at Wick on 19 August. He flew his first operational sortie on 4 September and his last with 3 Squadron on 19 September. A posting to 615 Squadron at Northolt followed on 10 October. 1941 started with a posting to the CFS at Upavon for an instructor's course after which Moore, with a '' commendation, commenced instructing at his old school 8 E&RFTS Woodley on 3 March. This posting continued until February 1942 when he sailed for Canada to instruct at 36 EFTS Pearce, near Fort Macleod, Alberta, operating the Boeing Stearman. After logging 1000 hours on this type he moved to 32 EFTS Bowden, also in Alberta with a mix of Stearmans and Tiger Moths.

A further stint at 34 EFTS Assiniboia in Saskatchewan followed on 21 November. He received an 'Above Average' rating and 'An extremely capable & efficient instructor' comment when processed at 31 Personnel Despatch Centre, Moncton, New Brunswick for return to the UK. By 3 March 1943 he was serving at 59 Operational Training Unit Millfield, instructing on the Miles Master and Hurricane.  By 14 May the unit was at Brunton in Northumberland and he had amassed 1500 hours on the Hurricane. He returned to operations and his old squadron, No. 3, on 26 May 1943, operating the Typhoon at West Malling but moving to Manston in the following month. In the meantime he had completed a weeks Beam Approach Course at Wittering in Oxford aircraft.

On 19 February 1944 he makes his first flight in a Tempest Mk. V. The tempo of operations increases in the build-up to D-Day, in early May the squadron is re-equipped with Tempests and sorties concentrate on rail and barge targets. His logbook for 6 June records:

Started very quietly for No. 3 Squadron but with long hours of readiness, except for a convoy patrol off Beachy Head and then at 22.30 we took off as a squadron to patrol the beach head. It was a bad night and very dark by the time we got the other side it was impossible to see anything and as we're not b.... night fighters as the w/c said we returned and landed at Ford at 00.05. Twenty two hours on duty.

On 8 June he claims a Bf109G destroyed over Rouen, the second victory by a Tempest. From 18 June to 14 August the squadron is based at Newchurch on anti-V1 ('Divers') duties. Between 18 June and 10 August 1944 Moore destroyed 23 V1 flying bombs and shared another. Moore was awarded the DFC (gazetted 21 July 1944).

On 14 August Moore was posted to 56 Squadron as a Flight Commander, the squadron was also operating Tempests from Newchurch. The squadron moved to B-60 at Grimbergen, Belgium on 28 September and he shared in the destruction of a Fw190 the next day. There was another move, to Volkel in Holland, on 5 October and he reports taking a long-range shot at a Me262, without result. On 28 November he shot down a He219 and shared another and on 17 December shot down a Bf109 over Munster. He was advised of the award of a bar to his DFC, it was gazetted on 27 February 1945.

After a final sortie on 14 January 1945 he was returned to the UK, tour-expired.

His next posting, on 23 January 1945 was a test pilot's course at Boscombe Down. On completion on 5 January 1946 he went to the Air Fighting Development Unit, Central Fighter Establishment at West Raynham. After being offered a position as a test pilot with Rolls Royce Moore was released from the RAF on 1 May 1946 as a Squadron Leader, he joined RR the same month and immediately began flying Spitfire, Seafire, Lancaster, Meteor, Vampire and Hornet aircraft at Hucknall. Further types followed until 19 February 1947 when he took up a position with Saab of Sweden, specifically to test the J29 Tunnan (Barrel) at Linköping. The first flight of the first prototype J29 took place on 1 September 1948, testing continued with enhancements to the second prototype, which flew on 28 February 1949. On 3 November 1949 the test programme ended and Moore was engaged by Saab to establish a Saab car dealership in the UK, starting in January 1950. He was Managing Director of Saab Cars UK Ltd. for 23 years until 1973.

Moore passed away on 9 October 1988 at Windsor. 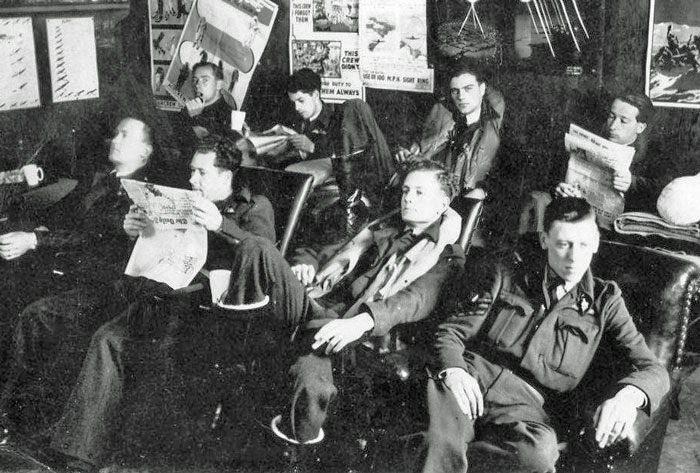 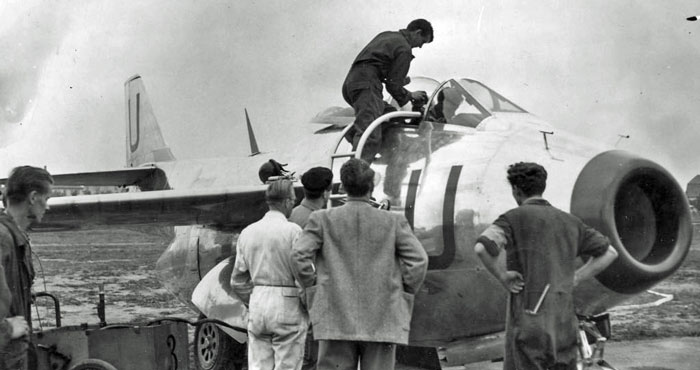 Moore in the cockpit of the SAAB J29 prototype.