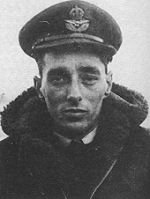 Jim Payton was born in Stratford-upon-Avon on 4 March 1917. He joined the Shropeshire Yeomanry TA, and had become a Sergeant at the outbreak of the war. When volunteers for the RAF were called for in early 1941, he opted to transfer in May, receiving his wings early in 1942, and attending 55 OTU at Usworth and Annan.

He was posted out to West Africa, serving for two months with the Defence Flight at Takoradi on Hurricane IIs, and then from August 1942 to June 1943 with 1432 Flight at Kadima with Hurricane Is.

He was commissioned in January 1941, but in July a bout of malaria caused him to be shipped home to England, where in October 1943 he joined 56 Squadron flying Typhoons. He flew his first operational sortie on 10 January 1944.

After the unit was re-equipped with Tempests in July, he shot down a V-1 on 7 August, and then late in the year the unit was moved to the Continent. On 29 December he claimed two Fw190s damaged, but these were later upgraded to "destroyed". On 26 March 1945 his Tempest was hit by Flak and he force-landed near the Rhein, but within Allied lines. A month later on 24 April, now a flight commander, he was hit again and crash-landed in flames in German territory, burning the back of his neck and his wrists. (Flying US-P SN131.) Captured, but he was released on 2 May and walked to US lines, being despatched to hospital in Brussels for some time.

On return to England he was posted to 56 OTU, Milfield, in August as i/c Test Flight, flying Typhoons and Tempests. In September he received a late award of the DFC. He was demobilised in November and returned to his pre-war job at bank where he worked until retirement in 1977. Late in 1988 a rare cancer of the bloodcells and bonemarrow was diagnosed in an advanced condition, and he died on 15 February 1989.