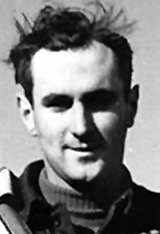 Warren Edward Schrader was born in Wellington, New Zealand, on 27 March 1921. Schrader worked as an accounts clerk prior joining the RNZAF in March 1941.

Posted to the United Kingdom on completion of basic traning, he joined 165 Squadron at the start of 1942. Following a summer of uneventful sweeps and patrols, he was posted to Malta in March 1943. On arrival he joined 1435 Squadron, flying a variety of operations, including some fighter-bombing attacks on airfields in Sicily. Despite operations during the Sicilian landings, little was to been seen and the Squadron moved to Brindisi on the Italian mainland at the start of November 1943. He had still not had an opportunity to engage an enemy aircraft, although he had become commander of A-Flight during July.

On 12th of that month however, he was able to destroy an S-79 on the ground at Valona airfield, Albania. It was during this month that the squadron re-equipped with Spitfire IXs. With these new aircraft success at last arrived on 17 December, when Messerschmitt Bf 109Gs were engaged over Albanian coast, Schrader claiming two shoot down. He was to share in the destruction of another on 3 January 1944, and was awarded a DFC in April.

His tour ended early in May and he was posted as an instructor to 71 O.T.U. at Ismailia, Egypt. Returning to England subsequently in early 1945, he transitioned to Tempests and was posted to 2nd TAF, joining 486 (NZ) Squadron at Volkel in Holland early in March as commanding officer. During April, as the Allied armies advanced across Northern Germany, he enjoyed a tremendous run of success, claiming nine and one shared in just three weeks.

On 2 May he was promoted Wg Cdr and given command of 616 Squadron on Meteor jets, claiming three aircraft destroyed on the ground next day. However, on 4 May all fighting in the area came to halt. A Bar to his DFC was to be awarded in June.

Schrader returned to New Zealand in late August 1946 and went on to the Reserve in December. Having joined the National Airways Corporation, he went on to become chief pilot before his retirement from flying in 1976. He subsequently became Safety Audit Manager for Air New Zealand, retiring in March 1983. Warren Schrader spent his retirement living on the Hibiscus Coast.

SA-A (NV969) was flown by Warren Schrader on most of his missions.