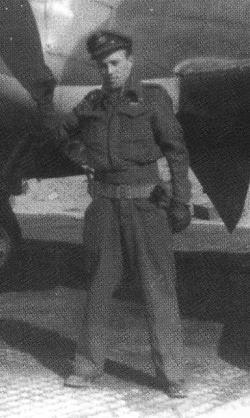 Seymour "Buck" Feldman was born in Brooklyn, New York on February 17, 1920, and grew up in upstate New York. Upon graduation from high school, he moved back to New York City with his family and took flying lessons at Floyd Bennet Field, earning a commercial flying license in 1941.

Feldman was one of many American flyers recruited to the British Royal Air Force in the early years of WWII. Known affectionately to his fellow fighter pilots as "Buck" he remained with the RAF for the duration of the war. He flew many combat missions in the Spitfire, Hurricane, Typhoon, and Tempest.

Feldman served with 3 Squadron on Typhoons and Tempests, first as an NCO and later being commissioned. He was posted to 274 Squadron at the end of 1944 as a Flying Officer.

Later he flew with the Israeli forces as a volunteer during 1948-49, flying Spitfire IXs. He gained one victory against the Egyptian Air Force.

Feldman was extremely proud of his service to the RAF and considered it one of his greatest accomplishments. Among his awards was the British Distinguished Flying Cross which he received in person from King George VI in July 1944. Feldman lived in Albuquerque from 1956 until his death. He worked at the Federal Aviation Administration until he retired in 1985.