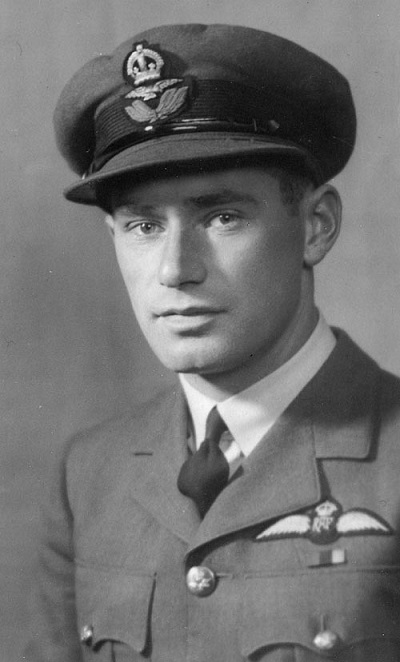 Ron Pottinger was conscripted into the British army in October 1939. Army service with the Royal Fusiliers was spent in the Uckfield area of Sussex, and after Dunkirk guarding the beaches of East Kent in anticipation of the invasion that never happened. By January 1941 there was a shortage of pilots and Ron applied for a transfer to the RAF. After successfully completing the entrance exams he was shipped out to Florida for aircrew training. On his return to England Ron joined No. 3 Squadron who had recently converted to flying the Hawker Typhoon. Later No. 3 Squadron were to be one of the first to convert to the Hawker Tempest Mk. V and with the appearance of the V1 Doodlebug, were held back from the invasion to deal with this menace.

January 1st 1945 saw him shot down by flak (JF-R EJ719) near Dulmen and taken prisoner. After interrogation and several days spent in the back of a train he arrived at Stalag IIIA, Lukenwalde. With fighting all around, the Germans retreated and he now became a guest of the Russian army until his eventual release some time after the end of hostilities!

Peacetime brought air testing and ferrying planes around the country until he was de-mobed. In civilian life he qualified as an Electrical Engineer at night school and reached the peak of his profession as a Chartered Engineer. A photo from Ron's personal album; Tempest SN110 ablaze after a collision with a moving tractor! On 8th October 1945 at Milfield.

- In Memory of Ron Pottinger