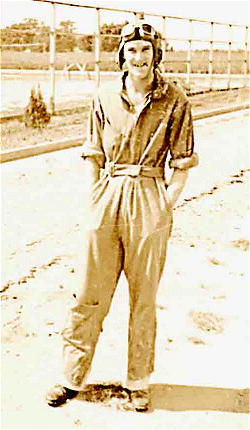 Walter Randall joined the RAF in 1941. He was accepted for aircrew training, and over the next two years was sent to the USA to learn to fly. After successfully gaining his 'wings" returned to England for operational training, much to his delight on the Spitfire.

In July 1944 he was posted to No 501 County of Goucester Squadron, at Goodwood, near Chichester. They were flying low level Spitfire VB's and were being used as escorts to low level bombers sweeping over northern France. Things were quiet at this time, and although he made several trips, the German opposition did not appear. In August 1944 the squadron was converted to the Hawker Tempest Mk. V

On 27 September 1944 F/S Walter Randall was on a Rhubarb mission over Holland. His Tempest Mk. V EJ611 was hit by flak and he had to force land south west of Zwolle. He was hidden by the Dutch resistance for 6 months.

A few months after getting back to UK he did get back into flying, and after a short refresher course in Lincolnshire, he was posted to India, to fly on ferry command, delivering combat aircraft to the front in Burma. However, by then the war in Europe and the far east was over. So he spent the next few months flying Dakota transport aircraft, ferrying personal between Madras and Karachi on their way to demobilisation in England.